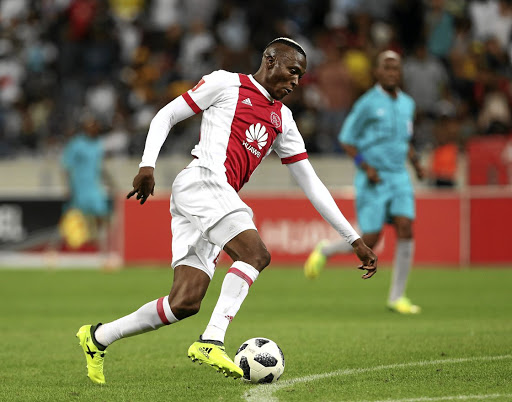 Tendai Ndoro of Ajax Cape Town is in limbo as Fifa ponders his eligibility to play for the club.
Image: Carl Fourie/Gallo Images

The case regarding whether Tendai Ndoro is eligible to play for Ajax Cape Town - his third club this season - is not unique, but it's a bit different from previous cases.

In previous cases, there were quick decisions taken to prevent a player from playing for a club or allowing it, yet the Ajax striker has already played seven league matches and helped his side accumulate 10 points.

One wonders what could have happened if it was established earlier that the PSL's Dispute Resolution Chamber (DRC) did not have jurisdiction to rule on the matter and it went straight to Fifa.

Fifa rules are clear, stating that "players may be registered with a maximum of three clubs during one season. During this period, the player is only eligible to play official matches for two clubs."

As an exception to this rule, "a player moving between two clubs belonging to associations with overlapping seasons (starting in summer/autumn as opposed to winter/spring) may be eligible to play in official matches for a third club during the relevant season".

Ndoro has played for three clubs: Orlando Pirates, Al Faisaly in Saudi Arabia and Ajax. Both the PSL and the Saudi seasons start at the same time.

The punishment usually meted out to those that field ineligible players is the docking of points. Locally, Mbombela were fined R50000 and docked three points for fielding the suspended Mxolisi Mayongo in an NFD clash with Tshakhuma Tsha Madzivhandila. The points were simply expunged and not awarded to Tshakhuma, however.

"Mbombela won 3-0, but they only lost the points and kept their goals," confirmed a source.

"But it also depends on whether the opponent played the match under protest or not," revealed another source.

"When Platinum Stars lost 3-1 to Ajax, they did not protest because they were not aware of Ndoro's ineligibility, because that was his first match, so in this case the points could be taken from Ajax, but Platinum Stars may not get anything,"

"In cases of Orlando Pirates [who lost 3-0 to Ajax] and Polokwane City [who drew 1-1], those teams played under protest and they may get the points."

Ajax and Ndoro's fate will lie with Fifa's players and status committee as of tomorrow, but it could be some time before the case is finalised because any party not happy with the outcome can appeal to the Court of Arbitration for Sport.