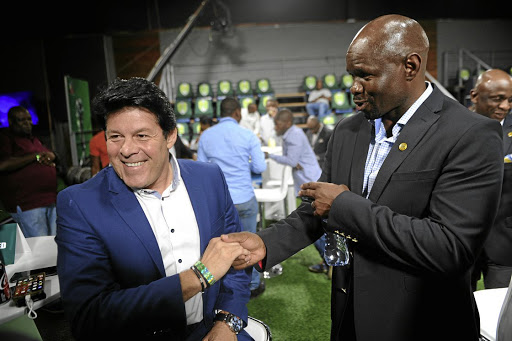 Free State Stars coach Luc Eymael rejects suggestions he would be out to make a huge impression when his team face up to Kaizer Chiefs twice in less than a month.

Tomorrow Stars host Chiefs at Goble Park in an Absa Premiership, before travelling to Amakhosi later for a semifinal clash of the Nedbank Cup.

He however remains a major influence on his underdog charges, a matter that further fuels rumours about his quality being sought at Naturena.

"Well, we play them two times. It's a good coincidence, if I can call it that. We just have a job to do against them and we will be ready," Eymael told Sowetan yesterday.

"It's rumours you know. I have a two-year contract with Stars and my focus is on my job. You can't avoid people talking about you.

"People have been linking me with Chiefs and SuperSport but I am a frank person and have not been contacted by them yet. It's flattering and an honour to be linked with any big team like Chiefs."

Stars have superseded expectations this season and find themselves ahead of Chiefs in the league.

Ea Lla Koto are fourth with 37 points while the Glamour Boys are a point behind at fifth. As the Belgian chases his first silverware in South Africa, he knows that progress to the final at the expense of Chiefs would be a big coup.

"Every team has it's strengths and weakness, so we will prepare for them from that point. Just like we do for any team, we have studied Chiefs in detail. In the cup it's one game and you're out.

"I don't play to lose and the same will apply here."