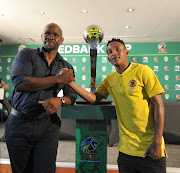 Kaizer Chiefs coach Steve Komphela says his side wanted a higher score margin than their 1-0 win against Baroak FC in the Nedbank Cup quarter-final fixture at Nelson Mandela Bay Stadium on Saturday night.

Erick Mathoho’s header in the first half saw Amakhosi  advance to the semifinals of the competition.

The win kept Komphela’s hopes alive of landing some silverware at Chiefs‚ as his contract draws to an end.

The coach said his players  missed many scoring opportunities and  going forward they would have to sharpen up on their finishing in front of goals.

“I thought in the first half we could have at least gone into the dressing room  with a 4-0 or 5-0 lead‚" he said.

"It’s sounds crazy‚ but there were possibilities.

“ We are delighted with the victory and we appreciate the fact that we had nice support  in PE‚” Komphela said.

"We just not happy with our finishing‚ we need to be clinical.

“The only way to win matches convincingly is to hit the back of the net‚ which is what I thought we were a bit shy.

"Going forward we need to go  back again and look to the Absa Premiership we have a match on Wednesday.”

Komphela said it was crucial for Chiefs to win the Nedbank Cup trophy not only for the players‚ but for the management and supporters who have been patiently waiting for some silverware.

“We have been to two cup finals‚ semifinals and all that.

"We need to win something not for ourselves‚ but we serve these people.

"You could see the number of people who were at the stadium.

“They want to win trophies.

"Chiefs is about winning trophies and it is their pride  and we want to qualify that.”