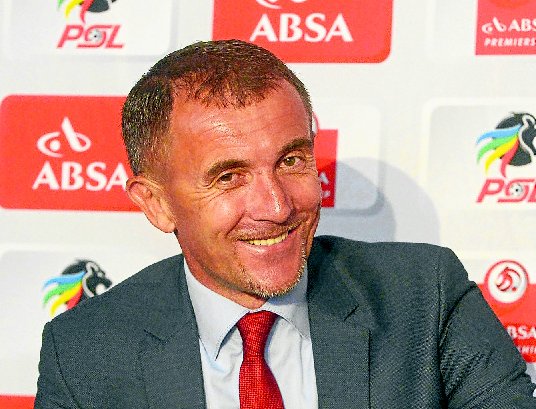 Orlando Pirates’ development and perennial caretaker-coach in times of crises Augusto Palacios believes that the Buccaneers can win this season’s Absa Premiership title.

Bucs’ head coach Milutin Sredojevic has continually‚ and probably cleverly‚ played down his team’s ambitions and chances even after they closed the gap on leaders Mamelodi Sundowns to one point‚ though having played one game more‚ with last week’s away win over AmaZulu.

Palacios‚ though‚ knows a thing or two about winning a league title in the closing part of a season with Pirates.

He took over as caretaker from Julio Leal with Pirates’ best team of the 2000s – the post-2010 World Cup back-to-back treble winners – floundering in sixth place with 12 games left‚ and clinched the 2011-12 title.

“For me‚ we wish and hope that six games left (this season) is nothing difficult‚” Palacios said.

“I took over the team with 12 games left‚ and we were in sixth position‚ and we managed to win the league. And we only lost against Santos.

“But now Pirates are one point from Sundowns and anything can happen. Because if they lose one point you are there.

“For me‚ it’s not to predict‚ but Pirates need to focus game by game. We can’t be thinking about Sundowns.

Palacios’s league winners‚ of course‚ were a special team.

One buoyed by the confidence of winning a treble the previous season under Ruud Krol‚ who had built the side‚ and packed with big‚ fearless characters who could run through walls like Benni McCarthy‚ Daine Klate‚ Lucky Lekgwati‚ Rooi Mahamutsa and Siyabonga Sangweni.

But Palacios points out that this could be balanced by the pressure that comes on the leaders‚ while Pirates‚ hardly expected to win anything this rebuilding season under Sredojevic‚ have nothing to lose coming from behind.

“Listen‚ in six games‚ anyone can challenge for the league. You must understand this‚” Palacios said.

“For me‚ it’s game by game. And it’s very difficult beacuse the pressure comes more at the (team at the) top. And (the team) coming behind is only trying to win.

“For me the league is not decided yet.”