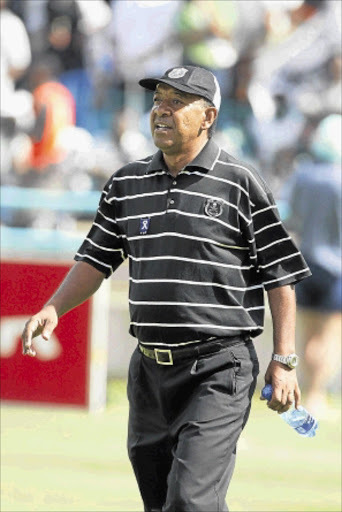 It is mostly a change in commitment and off-field lifestyle that separates the current‚ title chasing-Orlando Pirates from last season’s combination that stumbled to an 11th-placed hiatus‚ Bucs’ development head Augusto Palacios has said.

Pirates’ perennial caretaker-coach in a crisis Palacios acknowledged the tactical and technical work done by head coach Miultin Sredojevic and his assistant Rhulani Mokwena turning Bucs around this season to being in second place in the Absa Premiership with six games to go.

But he said what the pairing have done best is to have the players committed again‚ on and off the field.

During a 10-match caretaker spell last season Palacios often made reference to his belief that Bucs’ problems on the field were a result of a spillover from poor lifestyle issues that had crept in off-field amongst the squad.

He said that has all changed this season.

“If you play with the brain and you commit yourself‚ and not only commitment on the field‚ but I always say in football it’s outside the field.

“Look at the PSL now. How many superstars are there in first XIs? It’s not about names. It’s about players with commitment on the field.

“Check where (third-placed) Maritzburg United are‚ where (fourth-placed) Free State Stars are. It’s not about the superstars.

“And I’m happy because now the (Pirates) players are showing commitment inside the field and outside the field.”

Palacios also served as a caretaker for 12 games when he steered Bucs to clinching the 2011-12 league title and a second successive treble.

That team had been built by Dutchman Ruud Krol. Sredojevic’s Pirates have yet to win anything‚ but their dynamic football is perhaps the best since that of the double treble generation.

“At the time of Krol‚ you had wingers. Now the new system applied by ‘Micho’ (Sredojevic) and Rhulani is mobility‚” Palacios said.

“Remember‚ if you watch Sundowns and Pirates‚ it’s different. But watch some of the clubs who I don’t want to mention in Europe‚ and it’s the same thing.

“But what I like now is commitment of the players. The players have this energy. And this is good for the team.

“You remember when Pirates would be leading‚ would concede in the 89th minute‚ and you knew that Pirates could still come back to win the game.

“This has come back now. But why – the commitment of the players.

“Last season it was not there. And this is where I say‚ with your private life‚ your good training‚ your commitment for the team‚ you will win anything.”

Orlando Pirates link up with English side Chelsea

Orlando Pirates have joined an initiative‚ along with Chelsea and Shield deodorant‚ that will see the winner joining the Buccaneers’ MDC reserve team.
Sport
3 years ago

Orlando Pirates attacking midfielder Thembinkosi Lorch has set his sights on cementing his place in the national team with Africa Cup of Nations ...
Sport
3 years ago

Since Milutin "Micho" Sredojevic took the reins at Orlando Pirates his decision to rebuild the team has paid some dividends.
Sport
3 years ago

Rhulani Mokwena misses out on a Bafana call-up

Orlando Pirates assistant coach Rhulani Mokwena has missed out on the opportunity to represent the nation.
Sport
3 years ago
Next Article