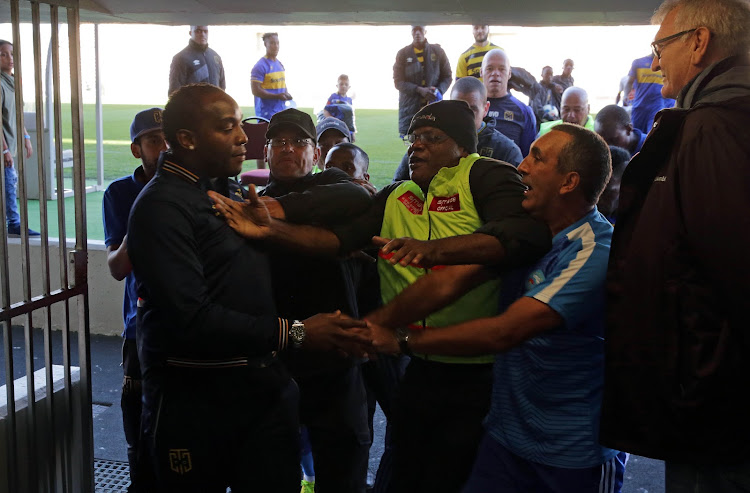 Benni McCarthy accused Mozambican club Costa do Sol of playing “gangster football” but there was an element of the outlaw about the Cape Town City coach as well after his side embarrassingly crashed out of the African Confederation Cup on Sunday.

McCarthy dished out a slap to a member of the opposing bench and tried to take out his opposite number in the tunnel at half-time in a tempestuous match that was marked by fighting both on and off the field.

“It was more like a bloody Sunday league gangster game there‚” McCarthy said after a match the visitors won 2-1 on the away goals rule.

“It ended up being really psychical and intimidating for the younger players.

"I’ve never been involved in a game where there were so many fights.

“The referee had no control over the game.

"I was more scared of losing some of my players for the rest of the season because of the tackles that were flying and him doing absolutely nothing.

"I know people will criticise me for this‚ but maybe us going out is a blessing in disguise because at least now I know my players are going to be safer in the Nedbank (Cup) and the league.

"Our officials (in SA) have way more control over the game than this.

"If this was a PSL game‚ (Costa do Sol) would have had two or three players sent off in the first half.

“But the learning curve was nice‚ it was a good experience.

"We’ve learnt a lot about the difference between playing in Africa and the PSL.”

McCarthy‚ who has also been fined for his criticism of PSL refs‚ added: “l’ll take the PSL all day‚ everyday over playing in Africa.”

City should have buried their opponents‚ who were not up to the same standard‚ under a goals avalanche but they allowed the visitors to stay in contention after failing to bury their chances at the Athlone Stadium.

"We made a slow start‚" said McCarthy.

"I said for us just to be compact and keep it nice and tight because they were 1-0 down (from the first leg) and were obviously going to throw caution to the wind.

"They brought in all their pacey players.

"We just had to be a little more organised and keep our calm and not rush things and then two minutes in (to the game) we do the opposite … panicking.”

Tshepo Gumede gave away a penalty for an unlucky handball after makeshift midfielder Kwanda Mngonyama had given away the ball.

Costa do Sol took the lead only for City to come back to 1-1 until six minutes from time when the Mozambicans scored from a corner to win the tie 2-1 on the away goals rule.

"It would have been nice to have gone further because I wanted to use the competition to rotate the players and give a chance to players like Zukile (Kewuti)‚ who did exceptionally well and came out of his shell.

"He’s now got some competitive games under his belt.

"I loved this tournament for that reason and I’m gutted.

"But at the end of the day the players made their bed and they must go and sleep in it.

"This is a chance now gone and opportunities for places in the side become slimmer.”