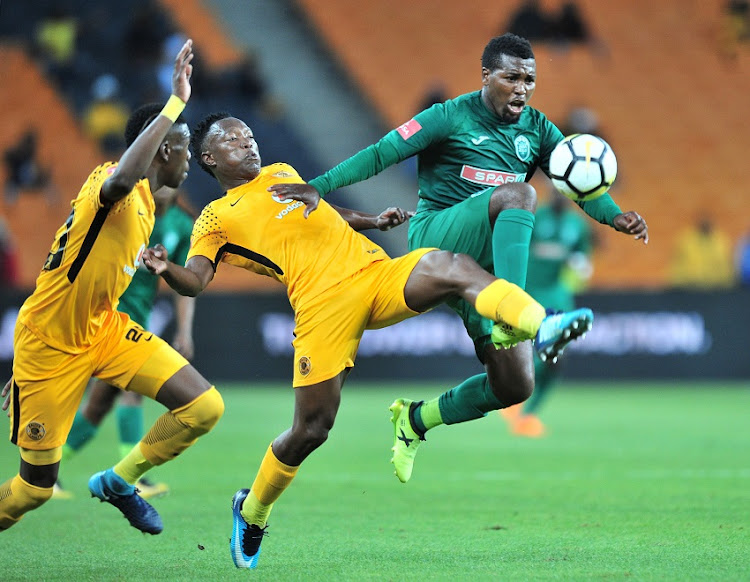 Teenage Hadebe and Daniel Cardoso of Kaizer Chiefs challenged by Mhlengi Cele of AmaZulu during the Absa Premiership 2017/18 match between Kaizer Chiefs and AmaZulu at FNB Stadium, Johannesburg on 17 March 2018.
Image: Samuel Shivambu/BackpagePix

This encounter between two league title non-entities never threatened to reach great heights, and in a bitterly cold wind that swept FNB Stadium on Saturday evening Kaizer Chiefs and AmaZulu duly served up a 0-0 Absa Premiership stalemate out of the middle drawer.

Chiefs have naturally had to talk up their chances of still winning the PSL, but, frankly, with performances as unconvincing as these, they should think again.

Amakhosi coach Steve Komphela has finally built, after more than two-and-a-half years at Naturena, a team that can actually be called that – a team.

But even now, nice guy and entertaining professor of English that he is, Komphela seems not to know how best to utilise the decent array of ammunition he has.

That Pule Ekstein – a midfielder with question marks over his technique and decision-making – can remain above January signing Siphelele Ntshangase in the pecking order coming off the bench is mystifying.

That Ntshangase is even on that bench as much so.

It just does not inspire confidence, and neither do flat performances and results at home against bottom-half dwellers such as Saturday night’s.

Chiefs edged the first half, but far from convincingly. They had the clear-cut opportunities, both from set-pieces.

In the 15th, from a Siphiwe Tshabalala free-kick Leonardo Castro elbowed space to get the header in, but would have been disappointed that it was inches off target past the left upright.

Just past the half-hour it was Bernard Parker’s free-kick that found the free head of Teenage Hadebe, who did find the target, Energy Murambadoro palming onto his upright.

For AmaZulu, the energetic midfielder Siyethemba Mnguni’s drive was struck powerfully and Itumeleng Khune’s left post would have felt the wind as it passed.

Komphela tried to shake up the stalemate bringing on Ekstein in the 49th minute, and Ryan Moon for Parker in the 52nd.

Soon after Tshabalala struck a drive at Murambadoro. But AmaZulu appeared to be finding the confidence to stick an eyeball out of the shell that they had brought with them to Johannesburg, Sbusiso Mbalisa squaring from the left for Ovidy Karuru to hit a shot wide.

Usuthu had another chance when the corner flag kept the ball in, allowing Karuru to dispossess Willard Katsande and find Mnguni, who struck well to force a stop from Khune.

From his introduction the former Baroka FC playmaker at least looked a player, unlike most of those who had started for Chiefs, capable of conjuring something. But he was given only 25 minutes to do that.