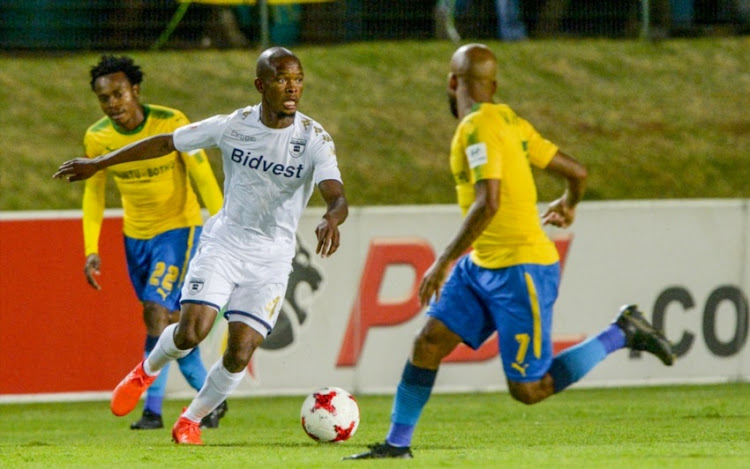 Phumlani Ntshangase of Wits and Oupa Manyisa of Mamelodi Sundowns during the Absa Premiership match between Bidvest Wits and Mamelodi Sundowns at Bidvest Stadium on November 21, 2017 in Johannesburg.
Image: Sydney Seshibedi/Gallo Images

South Africa’s four representatives in this year’s two African club competitions all have home advantage in the return legs of the second round ties and will play them across the weekend of March 16-18.

Television deals have been struck to allow the African Champions League matches involving Bidvest Wits and Mamelodi Sundowns to be screened on SuperSport as both clubs seek to qualify for the group stage.

Wits will host Primeiro Agosto of Angola at the Bidvest Stadium on Saturday‚ March 17 at 5pm‚ needing to come from a goal down after losing the first leg in Luanda on Wednesday.

Sundowns will host Rayon Sport of Rwanda at Loftus Versfeld on Sunday‚ March 18 at 7pm.

In the African Confederation Cup‚ both Cape Town City and SuperSport United looked well placed to advance to the third round‚ where they will be paired against clubs who are eliminated from the second round of the Champions League.

SuperSport‚ who drew 0-0 with Petro Atletico of Angola on Tuesday‚ host the return at Atteridgeville on Friday‚ March 16 at 7pm.

City‚ who take on Orlando Pirates in midweek in the Nedbank Cup‚ have elected to give themselves time to rest after the game against Bucs and will host Costa do Sol at the Athlone Stadium on Sunday‚ March 18 with a 4pm kick off.