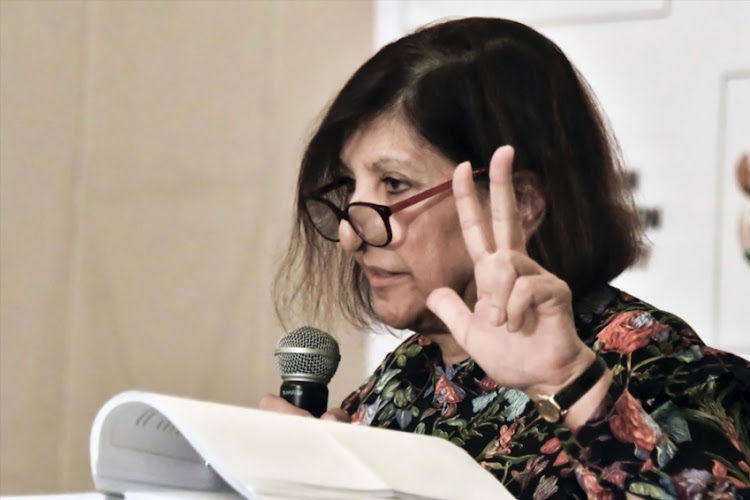 Hajera Kajee of Sascoc during the Ministerial Committee of Inquiry on SASCOC at Ellis Park Stadium Auditorium on March 05, 2018 in Johannesburg.
Image: Wessel Oosthuizen/Gallo Images

SA Sports Confederation and Olympic Committee (Sascoc) deputy president Hajera Kajee on Monday said she had resigned from the body’s investment arm because she didn’t want to be implicated in certain money transfers.

She was giving evidence to the ministerial committee of inquiry into Sascoc’s governance matters which got a first-hand taste of the boardroom battles as four members of the split executive came face to face at the hearing at the Ellis Park rugby stadium.

Kajee said she had recently resigned as a director of Gride‚ Sascoc’s investment arm which owns shares in gaming outfit Phumelela and was worth nearly R100-million.

“Part of that funding‚ we said‚ should be educational bursaries and so forth for athletes who want to study sports management and so forth‚ which we had done‚ but now it’s being used within Sascoc for operations‚” said Kajee‚ the second-highest ranking board member after president Gideon Sam.

“Therefore I resigned as a member with immediate effect because I don’t want to be implicated with that.”

Vice president Barry Hendrick‚ No3 in the Sascoc pecking order‚ later accused Kajee of lying about first learning in a board meeting of sexual harassment allegations against CEO Tubby Reddy‚ who has since been fired.

Kajee had testified that the alleged victim had spoken to her only about funds being made available for her coaching programme‚ and that she had advised her that the CEO was struggling with personal problems.

“Hajera is lying about the fact that she did not speak to [the alleged victim] about this [sexual harassment].

“She in fact phoned me‚ we spoke to each other over the phone‚ where she informed that [the victim] had in fact spoken to her and raised the issue of sexual harassment with her and she informed [her] that Mr Reddy is going through personal problems … so I need that to be stated‚ I’m under oath.”

The board is said to be split between Sascoc president Gideon Sam on side and Reddy on the other.

Much of Monday's testimony centred on the process around the dismissal of Reddy‚ CFO Vinesh Maharaj and manager Jean Kelly‚ the constitutionality of Sascoc’s 2016 elections‚ and the voting to eliminate one board member last year because the Sascoc executive‚ at 15‚ exceeded the 14 maximum stipulated by its constitution.

Kajee and Majeke felt the board was dysfunctional‚ and Hendricks believed they were turning the corner after getting rid of “a corrupt CEO [and] a corrupt CFO”​.

The magnitude of Sascoc’s spending over the past few years also came to light. The president’s per diem for any trip representing Sascoc was $500 a day‚ said Kajee‚ who herself was entitled to $350 day.

“It is exorbitant‚” agreed Kajee‚ adding these allowances had been substantially reduced because of austerity measures.

Marais‚ chairman of Sascoc’s finance committee‚ said Sascoc had spent R10-million on legal fees in the past three years‚ including R4-million on the disciplinary case against Reddy‚ Maharaj and Kelly.

He added the disciplinary was initially costed at R500‚000.

Hendricks said the cost ballooned largely because of the forensic IT investigation into laptops‚ with one consultant charging R4‚000 an hour.