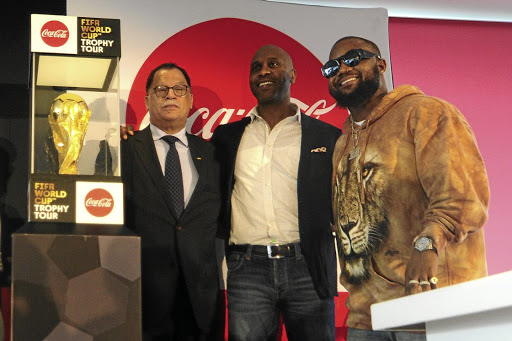 South Africans are asking: what's the point of bringing the Fifa World Cup trophy to the country when Bafana Bafana failed to qualify?

It's a fair question and SA Football Association (Safa) president Danny Jordaan acknowledged just as much during a media briefing at Fireblade Aviation in Kempton Park, east of Johannesburg, yesterday.

The trophy, which is made of solid gold and weighs 6.142kg, arrived from Mozambique as part of a world tour before the World Cup kicks off in Russia in June.

Jordaan, who was accompanied by new Sports Minister Tokozile Xasa and Safa CEO Dennis Mumble, assured the nation that coach Stuart Baxter is working on a "radical transformation plan" after the national team's failure to qualify for the global showpiece.

Baxter, who was named Bafana coach in May last year on a five-year contract, has a mandate to qualify for the 2019 Africa Cup of Nations and the 2022 World Cup to be hosted by Qatar.

Jordaan added that Safa has worked "very hard" to ensure the development structures were in place. The aim is to have one youth academy in each of the nine provinces.

Meanwhile, the World Cup trophy will be open for public viewing at Maponya Mall in Soweto today from 10.30am.

The next stop will be Cape Town at Newlands Stadium on Saturday.

Rapper Cassper Nyovest will for the first time perform the sound track, called Colours, for the 2018 World Cup in the Mother City.