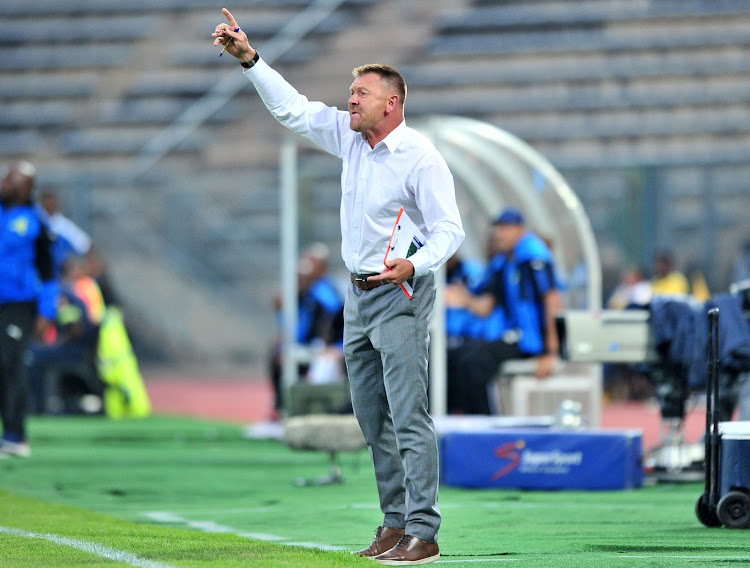 SuperSport United coach Eric Tinkler has said that with his team’s low league position the main priority‚ he will field fringe players in the initial stages of the Caf Confederation Cup.

It might have been because of the profile of the match‚ but battling Matsatsantsa showed a greater spring in the step in holding Absa Premiership leaders Mamelodi Sundowns to a 1-1 draw at Lucas Moripe Stadium on Saturday night.

Tinkler said this was the result of SuperSport‚ notably worn in recent months from their run to the 2017 Caf Confederation Cup final‚ resting front-liners and playing fringe squad members in a penalties Nedbank Cup defeat against Bloemfontein Celtic two weeks ago.

“The energy is back because we gave the guys a break. Unfortunately that cost us the Nedbank‚” the coach said.

“And that’s the effects that we have had from Caf.”

Tinkler said his priority‚ as SuperSport re-enter the Confederation Cup with an away first-leg match against Angola’s Petro de Luanda next week‚ is firmly on guiding 12th-placed Matsatsantsa to an “essential” top eight place in the PSL.

“It’s not a case of that we’re not going to take the Confed seriously‚” he said.

“It’s a competition that I love playing in.

"It’s a competition where I’d like to again go as far as I have been before.

“But our priority has to be the league right now.

"So if you ask me: ‘Am going to field my strongest team?’ Probably not.

“Because of everything that we have experienced so far‚ it would be too great a risk for me.”

Tinkler admitted he would welcome the break of not going the whole mile again this campaign‚ then trying again when Caf’s club competitions‚ like South Africa‚ align to a northern hemisphere calendar from next year.

“Exactly. Once it falls in line with us‚ then obviously we would like to take it seriously again.

“But also we want to give other players an opportunity‚ like I did in the Nedbank Cup.

“Nothing says they can’t go there and get the result.

"And nothing says that if we do secure our league position this season‚ we can’t take the Confed seriously then.”

Olympic champion sprinter Usain Bolt faced a social media backlash on Tuesday after a cryptic tweet he sent out on Monday created the impression that ...
Sport
4 years ago

The race for South African football's top job is reaching its final stretch after it emerged on Monday that incumbent Danny Jordaan and former ...
Sport
4 years ago

The Premier Soccer League’s (PSL) arbitration over Tendai Ndoro’s eligibility will only be heard on March 26.
Sport
4 years ago
Next Article