De Sa: ‘All I said was you can’t have a Gomes Show every week’ 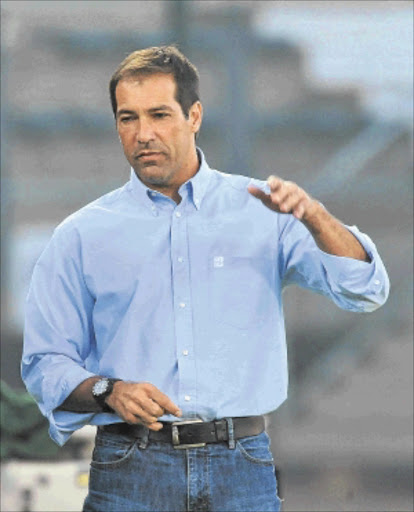 Roger de Sa’s running war with referee Victor Gomes took another dramatic twist on Friday as the controversial referee awarded a stoppage-time penalty to hand Maritzburg United a come-from-behind win over Platinum Stars‚ then sent the coach off after the game.

The 2-1 defeat for De Sa’s side keeps them firmly bottom of the table and facing the stark reality of relegation and the sending-off means the coach will be banished to the stands for the club’s next two games.

It is not the first time he has run foul of Gomes and there is little love lost between the pair‚ who had an on-field altercation after the final whistle‚ which led to the referee flashing a red card.

The penalty came after Stars’ midfielder Charles Baloyi clearly made contact with the ankle of Mohau Mokate in the penalty area and Gomes awarded the kick after his linesman Luvuyo Pupuma had flagged for it.

But De Sa was incensed after another perceived injustice and launched into a post-match tirade that could result in more sanction than just a two-match suspension.

Asked for his reaction by reporters after the game at the Harry Gwala Stadium‚ De Sa said: “It’s disappointing but it is expected‚ though.

“Before the game starts‚ and you see (which referee) comes out to warm up‚ you’ve got to be prepared for it. Stats will tell you‚ more than anything‚ it is not going to be football‚ it’s going to somebody else who will steals the show‚” he said in an obvious reference to Gomes.

“Everybody knows that. Not just me as a coach‚ but every coach knows that. If that is what the game is about … .

“A good game is when the game ends and you don’t even know who the referee was. I think that if more referees knew that‚ we’d probably have better football all-round.

“But look‚ we are not in charge of that department. We just have to knuckle down and keep going. Bigger and better people haven’t changed that. So who am I to change that?

“It’s like playing in Africa. You’ve got to expect those decisions and that kind of thing.”

De Sa is no stranger to criticism of referees‚ which has landed him in hot water before.

“Every time we say something‚ we get punished. It is always the same coaches who say it and we are the ones who get victimised.

“Not only do we get victimised straight away but also in future games. They hold grudges and they come out and look for you. We all know that happens. We can’t run away from it.

“The 16 (Premier Soccer League) coaches will have a go and it’s we who get called into DCs (disciplinary committees) and punished and fined. But you guys as reporters have got a bigger and better say than us‚” he told the media.

“You see it all the time. You’ll have a go at coaches‚ you’ll have go at players but I don’t know why you hold back on this type of thing. I don’t know why. It’s like you’ve got something round your neck. But you see it.

“Now you are interviewing me about a decision that (Gomes) made. Go interview the expert. That’s the problem with the game – (referees) are so protected‚ they’re untouchable.

“It’s about time some of these guys take responsibility for their decisions. And what it does to the livelihood of many people‚ because they have a massive effect. I can understand a mistake but – come on guys‚ the stats are there. Really! How much more‚” he continued.

“The worst thing about it is‚ I said to him after the game‚ ‘Victor‚ come on man‚ you can’t have the Gomes Show every week’. Those were my exact words.

“Is that a red card? That’s all I said. I was actually trying to give him a bit of advice. And he turned around and said that was ‘ungentlemanly conduct’ and gave me a red card.

After getting his first marching orders in his professional career as a coach‚ Pitso Mosimane appealed to former referee Ace Ngcobo to provide some ...
Sport
4 years ago

Sundowns coach Pitso Mosimane did not swear at or insult referee Victor Gomes in Friday night’s 1-0 win over Cape Town City.
Sport
4 years ago
Next Article