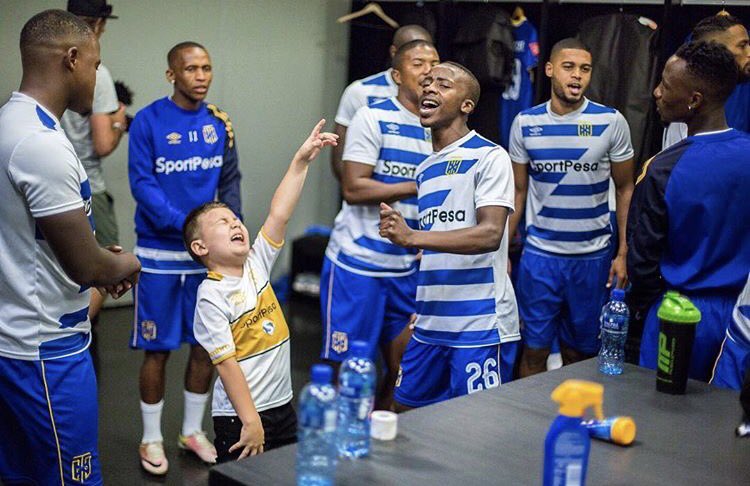 Cape Town City’s seven-year-old “mascot” Mateo‚ whose dance moves and singing to the words with the players in the change rooms have been a social media sensation‚ is the son of Citizens assistant-coach Vasili Manousakis.

Manousakis (45) said Premier Soccer League-obsessed Mateo is blissfully unaware of the reaction he has created‚ where football fans have fawned over the boy’s township dancing style and made comments such as‚ “This is what this country needs”.

“He’s seven years old. He started singing with the team when he was six last season‚” Manousakis said.

“I don’t know what to say about this kid. He’s just obsessed with local football‚ with the PSL‚ with the players‚ their culture‚ their singing‚ their language.

“It got to a point where the players were actually‚ like‚ ‘Where’s Mateo‚ we’re waiting for him – we’re going to sing now’.

“And he also brings a calming affect. He’s a kid‚ and he’s pure.

“He does what he loves. He doesn’t want to miss a home game‚ even if it’s in midweek – he just suffers the next day at school.

“He knows the players‚ he knows the numbers. And not just City. He’s got favourites in every team.

“If you ask a seven-year-old (white) kid what team he supports he’ll say Chelsea or Man United‚ and won’t even know the players.

“Mateo watches every PSL game at home. What seven-year-old kid watches 90 minutes of football? And he just loves the PSL.”

Our boys are always ready to bring the 🔥🔥🔥#iamCityFC pic.twitter.com/VTMJOSUSzE

Manousakis said Mateo was taught his dance moves and the words to songs – sung in change rooms to lift the spirit before matches‚ or to celebrate victories – by City’s players.

“He’d come with me to trainings and matches. Slowly he’d sneak into the change room‚” the City assistant said.

“From the warmup songs he started getting the beat. The next minute we’re looking over our shoulders and he’s walking through the tunnel going out with the players.

“But I mean‚ he has no idea of the impact this has done (on social media). He just rocks up casually. If he goes on the field after the game he has people calling him.

“When we lost against Mamelodi Sundowns at Athlone‚ the Downs fans were calling him to come sing with them.

“And he’ll just casually wave as if it’s a normal thing and people know him.

“There was a section on (TV show) Love PSL on him. They spoke to him in the stands. When they aired that he couldn’t actually watch himself.

“He was turning his face into the pillow. He’s shy and can’t conceptualise that he’s out there and on TV.”

Singing on point Mateo.... The kit not so much. 👆 pic.twitter.com/q0ybbMc3Fj

Mateo has a younger brother‚ Leandro (4)‚ and both attend Durbanville Preparatory School.

He has just started playing football for a club‚ Durbanville.

“So either he’s going to be a very good left-back or a decent winger‚” Manousakis said.