Da Gama attributes success at Highlands to his technical team 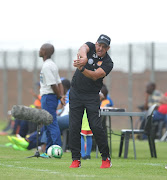 Owen Da Gama says his technical team at Highlands Park‚ which includes members with Bafana Bafana experience‚ is the reason behind his team’s fine organisation and conditioning that has been evident on the field for the First Division leaders.

Highlands appear to be storming to promotion‚ and a return to the Premier Soccer League a year after relegation‚ especially on the back of a 4-0 thrashing of fifth-placed Jomo Cosmos at Vosloorus Stadium on Sunday.

That took Highlands to nine points clear of second-placed Real Kings with nine games to go.

Yet things were very different when Da Gama‚ who had been frozen out of his Bafana assistant position when Stuart Baxter replaced Shakes Mashaba as national coach in May‚ took over a Highlands floundering in ninth place after five games in September.

Da Gama roped in his former South Africa Under-23 physical trainer Simone Conley and‚ as assistant-coach‚ friend and one-time Platinum Stars cohort Allan Freese‚ who had been recklessly fired by Highlands in the PSL the previous season.

Evident on Saturday was Highlands’ far superior shape than Cosmos‚ and a team in clearly superior condition‚ who could beat Ezenkosi to the ball‚ then utilize it at a high tempo.

“Look‚ a lot of credit must go to the technical team. Allan Freese has done fantastic. Simone Conley – I think she’s the best in the business‚” Da Gama said.

“I think that she’s a class act. And all this‚ it’s from a scientific point of view. It’s done very professionally.

“Victor Tshabalala‚ who I also worked with at Nedbank‚ and then you have Stavros (Tsichlas)‚ the goalkeeper-coach who has international experience (with the SA U-17s).

Da Gama was singing the same tune after beating Cosmos as before the game‚ playing down his team’s commanding lead in the NFD and chances of promotion.

“It’s a very‚ very‚ rugged‚ very hard league. So you never know what’s going to happen next week‚” he said.

“That’s why we’re not even thinking about the PSL or planning anything. We’re just concentrating on our next game.”