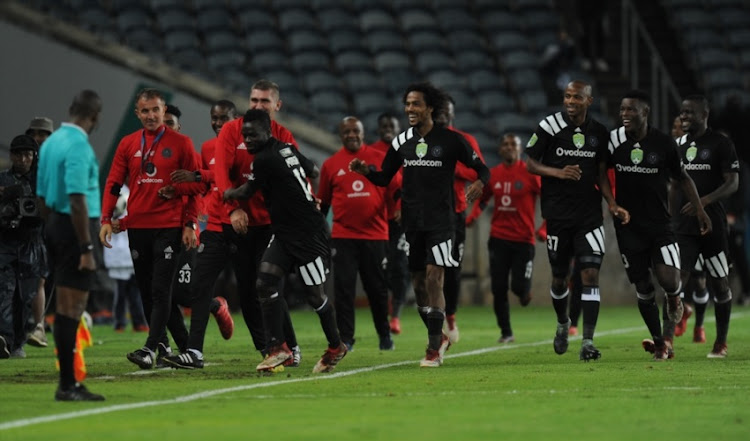 Bernard Morrison got a rare start and rewarded Bucs with a promising performance capped by 43rd and 48th-minute strikes.

The Ghanaian, signed with high expectations a season-and-a-half ago, took advantage of injuries to perhaps earn himself more recognition going forward.

On a muggy evening and surface made soggy by a pre-match storm, Pirates, forced into six changes, started slowly but gained confidence to exact revenge for a 3-0 shock in Cape Town 10 days ago.

A few players – notably Issa Sarr and Thembinkosi Lorch – stepped up relatively seamlessly for Bucs, in what seems a sign of a well-drilled squad by Milutin Sredojevic.
Pirates’ coach had a hospital rather than an injury list.

Musa Nyatama’s suspension and Abbubaker Mobara’s injury were known in the week. Of some doubtful starters – Thabiso Kutumela, Mpho Makola and Luvuyo Memela – only the last of those made it, and then only onto the bench.

Goalkeeper Jackson Mabokgwane pulled up with a groin injury, and Siyabonga Mpontshane started.

Ajax coach Muhsin Ertugral has had his share of absentees too – notably Mosa Lebusa and Yannick Zakri – and made three changes from his team’s 1-1 league away draw against Polokwane City on Sunday.

One was Siboniso Gaxa making a debut at right-back.

Sredojevic kept the 3-4-3 formation that had been effective earning a 2-1 win against Maritzburg United here.

But the enforced changes – Diamond Thopola and Phetso Maphanga came in impressively at wingback, and Sarr resurfaced in central midfield – disrupted a rhythm his side had been nurturing.

And Pirates were up against an Ajax who, unlike in Cape Town, had come to sit deep and soak, and catch Bucs on the counter.

So it was not surprising that Pirates enjoyed possession in the first half but struggle to break through.

Early on Jody February had to save at the feet of Morrison from an Issa Sarr pass.

Tendai Ndoro, the figure of protests (one by Pirates), and boardroom decisions and appeals on eligibility, was Ajax’s danger man when they did forage forward.

He connected a volley from the edge of the box, from Fagrie Lakay’s chip, hard but high.

Bucs broke through before half time with a slickly worked goal. Thembinkosi Lorch’s side-foot put Justin Shonga through on the left to square sharply.

Morrison’s finish was as clean and crisp as the passes that provided it.

The restructured Bucs had found their stride and Lorch and Morrison combined for the second just back from the restart.

Lorch laid on another killer pass, and Morrison beautifully held off Mario Booysen and produced a burst of pace, then struck cleanly again past February.

But it was Pirates’ young substitute Lyle Foster, then Lorch, who came closest to adding to the scoreline with shots across the face.