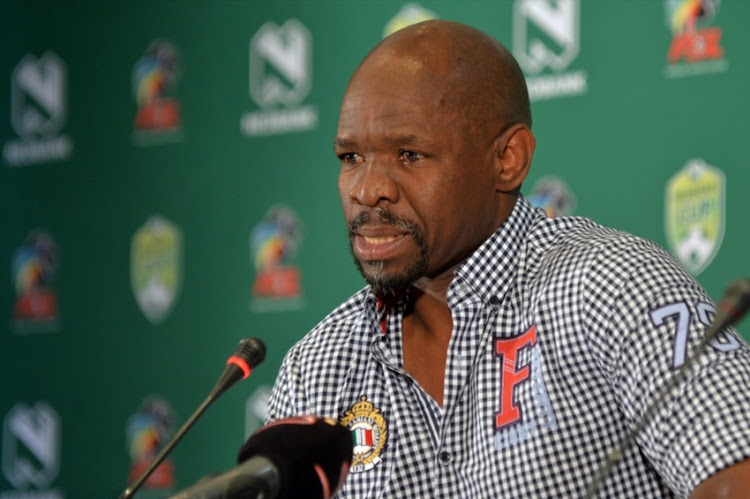 Steve Komphela has said he would “perish” so that Kaizer Chiefs can win the Nedbank Cup.

The Chiefs coach‚ in the advanced stage of his third season at Amakhosi‚ has yet to win a trophy at the Soweto giants as they prepare to take on Lamontville Golden Arrows in the last-32 of the Nedbank Cup at FNB Stadium on Sunday.

Komphela was asked at the pre-match press conference at the PSL offices on Thursday‚ given the hunger from the club and their supporters for the coach to win a trophy‚ and the carrot dangled by Chiefs giving him until the end of the season to prove himself‚ how important the Nedbank Cup is to him.

“Because of that wiring‚ maybe when I was created something went wrong‚ somehow.

"I’m going to say something very brutal and honest‚ if it were to happen‚ that I would accept‚” Komphela said.

“If the almighty were to come now and say to me‚ ‘Make a choice – that you perish‚ and we grant the trophy to Kaizer Chiefs‚ or you stay alive and (don’t) compete for the trophy’‚ do you know what my option would be?

“‘Take my life‚ my Lord. Let the people celebrate’.

“If you’re a man of process‚ you should never at any given stage consider yourself. You consider the process. That’s selflessness.

“Many people have gone through unbelievable challenges. But for their bravery in serving the process they came through unknown.

“And many of us would look to serve ourselves. Through minor hiccups we fail to go through because we consider ourselves more‚ ahead of the process.

“Chiefs winning the Nedbank would be great. And coaches must not be paranoid. Coaches are human beings – we serve people.

“And sport is like education. Sometimes in your own little challenge you are such an inspiration and great‚ great influence.

“Once you go through fire‚ you are easing somebody’s fire somewhere.”

Chiefs have two chances left to win silverware in 2017/18. They are in the chasing pack‚ in fourth place‚ in the Absa Premiership‚ seven points behind leaders Mamelodi Sundowns.