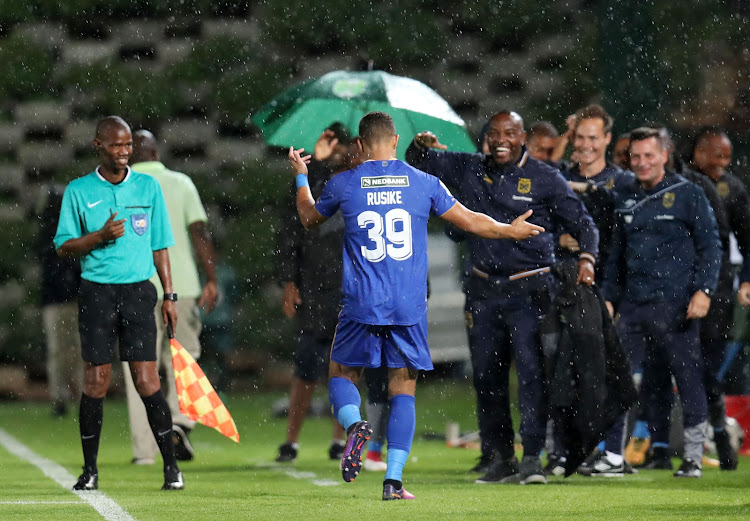 Newly signed Cape Town City forward Matthew Rusike celebrates with head caoch Benni McCarthy after scoring the only goal of the match during a Nedbank Cup match against Bidvest Wits at Bidvest Stadium, Johannesburg South Africa on 07 February 2018. City won 1-0 to advance to the last 16 round.
Image: Muzi Ntombela/BackpagePix

Cape Town City have had so many smash and grabs against Bidvest Wits this season a charge sheet should have been laid at the SAPS.

Driving rain drenched the Bidvest Stadium pitch and its inhabitants in the first half and made for difficult playing conditions.

City have now been edged or dominated over 90 minutes by Wits and won four times in 2017-18. These included the early-season league win at Bidvest, then home and away MTN8 semifinals.

Wits coach Hunt surely will not look forward to his team’s fifth and final fixture against City at Cape Town Stadium on February 24 with much relish, save than to exact some form of revenge.

City’s trend of grabbing goals against the run of play against the Clever Boys continued.

From Teko Modise’s chipped cross from deep on the right Rusike got in-between centre-backs Bongani Khumalo and Buhle Mkhwanazi to nod a superbly-placed headed finish past Darren Keet for the Zimbabwean signing’s first goal for the Citizens.

From there it was almost all Wits on attack, immediately going in search of the equaliser.

Within seconds of the restart James Keene squared for Sifiso Myeni, who blasted over.

A dipping Vincent Pule free-kick was tipped over by Shu-Aib Walters.

Pule latched onto a loose ball in the area, made space, and he too lifted a shot high from a good position.

City might have been 1-0 up but McCarthy was still frustrated enough at the direction of traffic, and his side’s inability to get into the game and press the goal advantage, to replace Ayanda Patosi in attack with Craig Martin in the 39th.

In the conditions the casualties began to mount up after the break. For Wits, Thabang Monare replaced a limping Myeni.

Then a clash of heads between Martin and Wits left-back Sifiso Hlanti saw both off the field. City, needing to defend, brought on left-back Edmilson Dove. Wits, seeking a goal, introduced forward Thobani Mncwango.

The disruptions played into the Citizens’ hands defending a lead. Wits, too, were simply less able to penetrate a resolute City structure.

Keet pushed up into the City box and won a header deep into five minutes of injury time but Khumalo could not sweep past Walters with the last kick of the game.

On certain statistics‚ new SuperSport United signing Evans Rusike comes out second to Percy Tau as an attacker in the Premier Soccer League‚ says the ...
Sport
4 years ago

Bidvest Wits go into Saturday’s crucial Premier Soccer League home clash against Kaizer Chiefs on the back of four unbeaten matches. However‚ that’s ...
Sport
4 years ago

The January transfer window has slammed shut with a number of Premier Soccer League clubs making significant changes to their squad.
Sport
4 years ago
Next Article