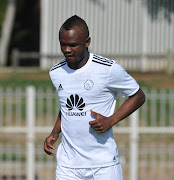 Muhsin Ertugral says he is not afraid to throw new signing Siboniso Gaxa into the Ajax Cape Town side at any time‚ even if the former Kaizer Chiefs star has not played since last season.

This suggests that the veteran fullback may feature in the Nedbank Cup Last 32 clash at Orlando Pirates on Saturday‚ though perhaps as a central defender rather than a wing-back.

Ertugral hinted that he may not be utilised as a right-back‚ his normal position‚ after the club also acquired Siyanda Zwane on loan from Mamelodi Sundowns in the last transfer window.

The coach has praised the experience and decision-making of the 33-year-old former Bafana Bafana star‚ and says that even if not fully fit‚ those qualities could be well utilised on the pitch for Ajax.

“He is a South African international and his experience at the moment is more vital than his physical strength‚” Ertugral said.

“So there are those elements that he can give the team on the road‚ when we are playing with the ball or without the ball.

“The right decisions that he takes … even without physical fitness.

"He is working hard‚ that [fitness] gap can be closed after the Golden Arrows game [on February 25]‚ then I think he will be completely ready.

“But also I am not scared to put him in because we need a player like that.

"He can also play some other positions.”

Ertugral is delighted to finally be working with Gaxa‚ having tried to sign him during his second spell as coach of Chiefs a decade ago.

“’Pa’ is a player that when I was with Chiefs‚ I loved how he was he was playing.

"When I was there we couldn’t get him‚ when I left he was on the transfer-list that we had developed at the time and Chiefs got him.”

Gaxa has not played since he left BidVest Wits at the end of the 2016/17 season.