Most shocking upsets of all time in the Nedbank Cup 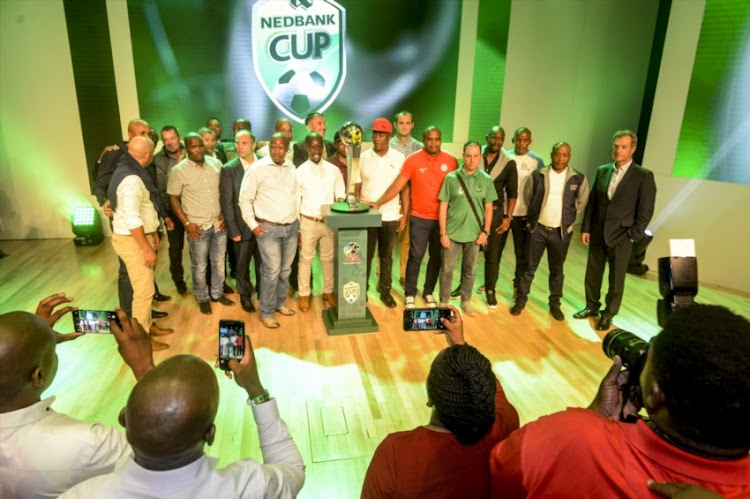 Coaches of the 32 teams during the Nedbank Cup Last 32 Draw at Nedbank Head Offices on January 15, 2018 in Johannesburg.
Image: Sydney Seshibedi/Gallo Images

The Nedbank Cup gets under way for 2018 on Wednesday when lower league teams will again have the chance to write their names into the history books in South Africa’s ‘FA Cup’.

The Last 32 draw has yielded a few opportunities for giant-killing acts‚ with perhaps Cape Town All Stars’ hosting of Mamelodi Sundowns on Friday the biggest potential upset.

Swallows FC can also make a case for their potential when they entertain Maritzburg United‚ while second-tier side Super Eagles will want to get one over ‘big brother’ Free State Stars.

SowetanLIVE looks back at the last five decades of results in the Nedbank Cup competition to find the most shocking upsets of all time:

1) Pimville Champions stunned Lamontville Golden Arrows 6-2 in their 1971 Life Challenge Cup quarterfinal after the two teams had drawn their first encounter 1-1 after extra time‚ but then refused to hold a penalty shootout‚ preferring to replay.

This is still a record loss for a top league side against lower league opposition.

2) A hat-trick from Johannes Simelane helped Alexandria Blackpool beat Arcadia 4-3 in the quarterfinals of the 1978 Mainstay Cup to become the first side from lower leagues to reach the semifinal of the major cup competition in the multi-racial era.

Blackpool lost to Chiefs in the semifinal.

3) Zola Young Stars beat Orlando Pirates 5-3 on post-match penalties after a 3-3 draw in the first round of the 1991 BoB Save Super Bowl.

4) Rookie coach Gavin Hunt took second division Seven Stars all the way to the 1997 Super Bowl semifinal as they beat Umtata Bush Bucks 3-1 in the last eight but then lost on penalties to Sundowns in the semifinals.

5) University of Pretoria were a second-tier side when they reached the final of the 2009 Nedbank Cup‚ and along the way had some notable scalps‚ including that of Kaizer Chiefs in a real cup classic.

AmaTuks ran out 4-3 winners as Mthokozisi Yende‚ who would later join AmaKhosi‚ a double from Phenyo Mongalo (later with Pirates) and Thabo Moleko all netted.

Chiefs scored a controversial ‘handball’ goal via Jose Torrealba‚ as well as a trademark free-kick from Siphiwe Tshabalala and a Josta Dladla goal.

6) ALS Puk Tuwana were little known when they took on Platinum Stars in the 2010 Nedbank Cup‚ but as a feeder club to Mamelodi Sundowns‚ the third-tier side had some decent players in their camp and won 3-2 against coach Steve Komphela’s side.

Tuwana netted through Lebepe Phetolo and Jabulani Shongwe‚ later with Sundowns and BidVest Wits‚ though Stars got a goal back through Kagiso Senamela.

Shongwe netted his second to make the scoreline 3-1 and the minnows might have been further ahead too‚ but Stars goalkeeper Tapuwa Kapini saved Buhle Mkhwanazi's penalty.

Senamela scored again to complete his brace and set up a barnstorming final 17 minutes‚ but try as they might‚ Dikwena could not find a way through.

7) FC Cape Town are no more having been morphed into Ubuntu Cape Town‚ but they were the cause of one of the biggest shocks in South African football when they beat Chiefs 2-0 in the second round of the Nedbank Cup in 2010.

Lyle Lakay‚ now at Cape Town City‚ gave the African Beasts the lead just before the 20-minute mark in the midst of some ferocious Chiefs attacking play.

The Premiership side were the better team on the day‚ but it was one of those cup games where everything ran for the minnows‚ and they got a second goal on 65 minutes through Samuel Eboule Bille.

8) Baroka FC had already beaten Swallows by the time they faced Chiefs in the quarterfinals of the 2011 Nedbank Cup‚ played at the Peter Mokaba Stadium‚ as the mighty AmaKhosi were beaten for a third season in a row by lower league opponents.

Things appeared to be going to plan for AmaKhosi as Jimmy Tau raced down the right and crossed for Knowledge Musona‚ whose left footed strike hit the roof of the net.

But Baroka were back on level terms just a minute before the break‚ veteran Sam Ndlovu heading home from a corner to stun the visitors.

Chiefs had numerous opportunities in the second half to secure the win‚ but after a litany of misses‚ were made to pay for their wastefulness in front of goal.

Baroka striker Thobani Mncwango bundled the ball home in injury-time after a melee in the box to complete the greatest victory in the club’s short history.

9) Orlando Pirates were stunned 4-1 by third-tier Maluti FET College in the first round of the 2013 Nedbank Cup‚ with their hosts also missing a penalty as the scoreline could have been even more of a humiliation.

Luckyboy Mokoena and Mashale Rantabane both netted braces for Maluti‚ while Oupa Manyisa got a consolation for Pirates in what is arguably the biggest upset in South African football history.

The ABC Motsepe League side would go on to narrowly lose with 10 men to Kaizer Chiefs in the next round as they showed they were a team with plenty of ability.

Mduduzi Nkosi scored the only goal of the game just before halftime as United shocked Eric Tinkler’s Telkom Knockout champions.

The January transfer window has slammed shut with a number of Premier Soccer League clubs making significant changes to their squad.
Sport
3 years ago

If the Tendai Ndoro issue was a thorn in the Premier Soccer League’s 2017-18 season‚ now the wound is threatening to go infected.
Sport
3 years ago

Bidvest Wits go into Saturday’s crucial Premier Soccer League home clash against Kaizer Chiefs on the back of four unbeaten matches. However‚ that’s ...
Sport
3 years ago

The Premier Soccer League (PSL) will appeal the decision by its own dispute resolution chamber (DRC) allowing Tendai Ndoro to turn out for Ajax Cape ...
Sport
3 years ago
Next Article