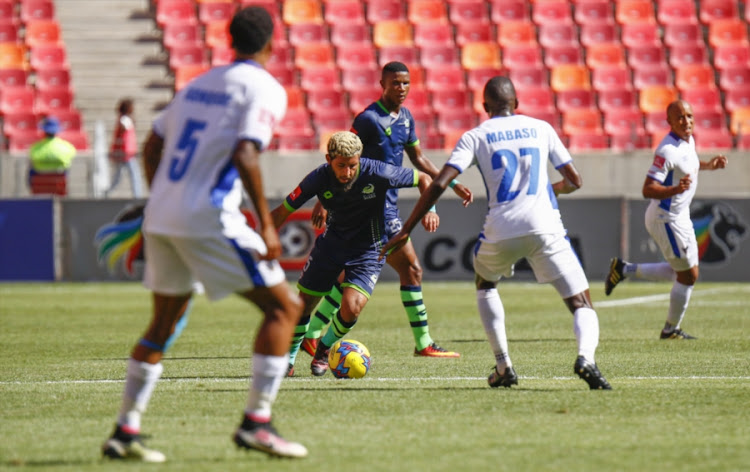 Riyaad Norodien of Platinum Stars during the Absa Premiership match against Chippa United at Nelson Mandela Bay Stadium on February 04, 2018 in Port Elizabeth, South Africa. Norodien, on loan from Orlando Pirates until the end of the season, scored twice on his Stars debut in a thrilling match that ended 3 - 3.
Image: Michael Sheehan/Gallo Images

Chippa United were hoping to crack their run of four consecutive draws but it was not to be as they played to an exciting 3-3 draw in their Absa Premiership fixture at Nelson Mandela Bay stadium, in Port Elizabeth, on Sunday.

Chippa coach Tebuho Moloi said the match would be an emotional occasion for his coming up against his former mentor Roger de Sa.

Well, there was much on  emotion on show as it rained goals at both ends but  Moloi had to settle for the his team’s fifth draw in a row.

There was plenty of action from the NMB stadium as teams scored a record of six goals which has not happened this season.

A brace from Mark Mayambela and a goal from  Andile Mbenyane for the Chilli Boys and two from Riyaad Norodien and one by Gerald Phiri for Dikwena kept spectators on the edge of their seats.

Stars, who are rooted to the bottom of the table, will be happy to leave Port Elizabeth with a point as they continue their quest to stave off relegation.

By contrast, the point Chippa earned keeps them in the top eight but Moloi will feel that two extra points were left on the pitch.

The game kicked off to a rather slow start as teams were trying to get into the groove of things in opening minutes  of the first  half.

The homeside  had beautiful  touches  in the middle the park  but were not making any early threats up front.

Veteran striker  Mark  Mayambela’s experience came to good use when he headed in a beautiful goal that put the Chilli Boys ahead and renewed their confidence.

Miscommunication between  Mxolisi Machuphu and Mayambela saw them lose out on a chance to put the Chilli Boys ahead by a second goal.

Mayambela had a chance to make it 2-0 again but could not hold on to the ball in the penalty area.

He was keeping the Platinum Stars defenders extremely busy upfront with the shots on target.

Norodien put his side back into the game towards the end of the half with a brilliant shot at point-blank range.

The Chilli Boys were smelling blood in the second half and  were pushing hard to get as second goal. Lentjies was knocking hard but his efforts  did not amount to anything.

He was eventually substituted for Sali who brought about good interplay between himself and Mayambela.

The Chilli Boys had an opportunity to score early in the second half but Paseka Mako’s shot flew right over the goal.

Mayambela, who was in red hot form, put the Chilli Boys back in front with well-timed kick.

Daniel Akpeyi came to the rescue for Chippa United when he saved a thunderous free kick  from Norodien.

Chippa were punished for failing to clear the ball in the penalty area and Norodien fired in a shot that left Akpeyi dazzled.

Just when the home side thought they had won the match Gerald Phiri, who came on as substitute, slotted a free kick to steal a share of the points.

In another match at the Old Peter Mokaba Stadium Polokwane City were held at home to a 1-1 draw against Ajax Cape Town.

Zimbabwean goal ace Walter Musona put City ahead with a long range scorcher that gave the Ajax keeper Jody February no chance to make it 1-0.

Fagrie Lakay equalized for the visitors.