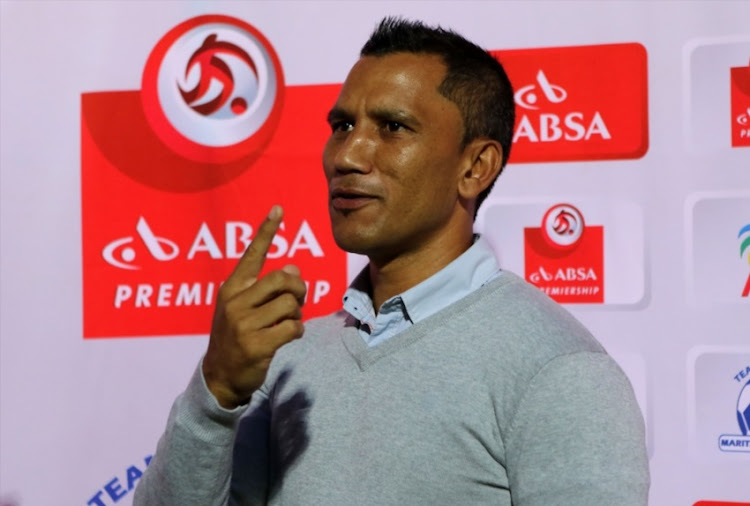 Orlando Pirates are a “fantastic team”‚ Maritzburg United coach Fadlu Davids has said ahead of Saturday’s Absa Premiership match-up between the two sides at Orlando Stadium.

In what could be the game of the weekend‚ United‚ who have lost once in six games‚ with four of those wins‚ meet a Pirates playing much-admired football‚ but on the rebound from a 3-0 shock away against second-last Ajax Cape Town on Wednesday night.

“Pirates are a fantastic side playing fantastic football‚ but we definitely want to get something out of it‚” Davids said.

The Maritzburg coach put his team’s form – traditional bottom-half dwellers United are in sixth position‚ just two points behind fourth-placed Pirates‚ and with a game in hand – down to a team effort in defence.

Davids did also single out the addition of Ghana international goalkeeper Richard Ofori as having especially made an impact.

“When Virgil Vries left we needed a profile goalkeeper who is good in the air. We looked at our youth and at the Diski team‚ and had a lot of short players‚” United’s coach said.

“We knew last season that crosses into the box were our weak point‚ and Richard gives us that dimension.

“(But) it’s a team effort. It starts from up-front where we press the opposition‚ so it’s not only about our defence and our goalkeeper.”

United have conceded the joint-least goals in the PSL with third placed Kaizer Chiefs (11).

Pirates coach Milutin Sredojevic was left ruing more missed chances by his team against Ajax‚ with particularly left-back Innocent Maela spurning a second-half sitter that could have pulled the Buccaneers back into the game.

“It was game that gave everyone a chance‚” the coach said‚ despite the scoreline.

“Against the run of play we conceded from that corner kick (as Mosa Lebusa opened for Ajax). That pushed us to come out.

“We had prepared ourselves to close everything. However losing the ball carelessly to a counterattack – from I think the second or third time attacking the centre of the opponents in the first half – we conceded (Yannick Zakri’s second) goal.

“At half time we were looking regroup‚ to pull the best from us. But we couldn’t have the answer against a reinforced defence.

“The result did not reflect what really happened on the field. We need to accept it‚ learn a really humble pie lesson‚ and move forward.”

Pirates have won three and drawn one of their last five matches.