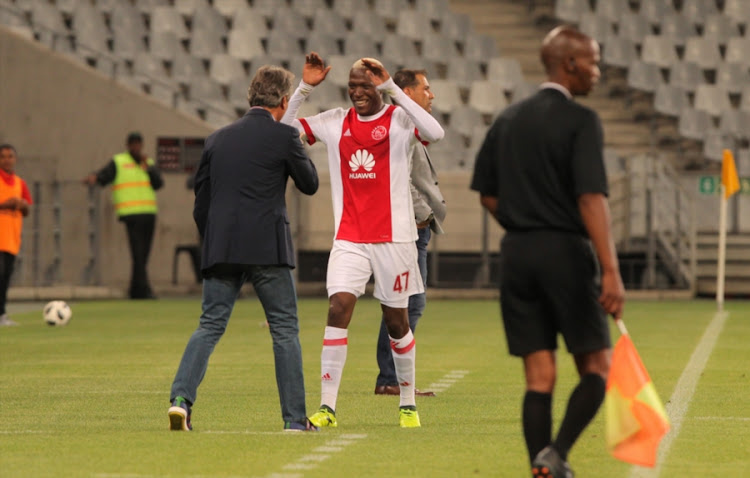 If the Tendai Ndoro issue was a thorn in the Premier Soccer League’s 2017-18 season‚ now the wound is threatening to go infected.

Two decisions – one by the league’s dispute resolution chamber (DRC) on Wednesday morning to clear the striker to play for Ajax Cape Town‚ then by the club to field Ndoro in Wednesday night’s 3-0 Absa Premiership win against Orlando Pirates at Cape Town Stadium – have escalated an already prickly matter.

The PSL is of the belief that the DRC got the ruling wrong.

They have apparently been advised to this effect by Fifa.

Hence they will appeal. The matter‚ due to PSL rules on the DRC‚ goes straight to arbitration.

Ajax were apparently informed of Fifa’s standpoint‚ and that the league would expedite the matter speedily.

So fielding the player against Pirates seems to have been risky.

It has potentially opened a can of worms in the league relegation battle.

Already the Urban Warriors‚ in second-last place on 20 points from 19 games‚ stand to lose three points from their win against last-placed Platinum Stars (15 from 19) on January 12 if the DRC ruling is overturned.

Stars cannot gain three points because they never lodged a protest at the game.

The DRC’s decision is baffling.

Fifa rules clearly state a player cannot be fielded for more than two clubs in a season.

Ndoro has played for three – Orlando Pirates in one match in August‚ then Saudi Arabia’s Al Faisaly in four games last year‚ and now for Ajax‚ having been signed in late December‚ in three games.

The PSL‚ apparently‚ had an obligation to register Ndoro. The onus on eligibility was on the club.

Now the PSL have appealed the decision of their own DRC.

“It’s not our decision. It’s an independent body.

"The DRC sits across the road (Jan Smuts Road‚ which separates the PSL and offices where the DRC sit)‚” PSL head of communications Luxolo September said.

Asked on Wednesday‚ ahead of the Ajax game‚ if the club could field Ndoro against Pirates‚ September said: “Look you must go and check what the rules say. We can just tell you what we have done.

“We have written to the club informing them on our intention to appeal.

“Our rules are quite clear on what happens with a decision that’s under appeal. You must go and check in the handbook‚ under the dispute resolution chamber.

The PSL’s Rule 24.3 states: “An appeal against an order of ... the Dispute Resolution Chamber will not suspend the operation of that order pending the finalisation of any appeal or arbitration in respect of that order.”

Ajax might believe this rule protects them from losing three points for fielding Ndoro against Pirates‚ once they were cleared to‚ even if the appeal goes against them.

But an appeals process‚ and Fifa’s potential intervention‚ or should the matter go all the way to Zurich‚ might see that curtain of protection a far from bullet-proof one.

Six points lost in this PSL relegation battle could be a relegation sentence for Ajax.

Retired athletics legend Usain Bolt is dead serious about pursuing a soccer career but if his performance at the Mamelodi Sundowns training session ...
Sport
3 years ago

Former Bafana Bafana coach Ephraim "Shakes" Mashaba has thrown his weight behind a new forum whose aim‚ according to a spokesman‚ is "regime change" ...
Sport
3 years ago

Retired Jamaican athletic superstar Usain Bolt joined Mamelodi Sundowns at training on Monday morning and showed a glimpse of what he can do on a ...
Sport
3 years ago
Next Article