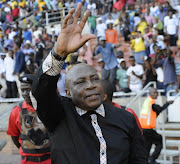 Former Bafana Bafana coach Ephraim "Shakes" Mashaba has thrown his weight behind a new forum whose aim‚ according to a spokesman‚ is "regime change" at the South African Football Association (Safa).

The National Football Consultative Forum (NFCF) was launched at a Sandton luxury apartment block on Monday‚ with various aims‚ one of which‚ said spokesman Thabo Masombuka‚ was to influence a change in leadership at Safa.

Mashaba‚ dismissed as Bafana coach by Safa after a displinary hearing in December 2016‚ was present at the launch‚ and stressed that his support for the forum was not motivated by settling scores.

"I want people to know it's not about grudges‚" Mashaba said.

"It's about the deteriorating standard of football‚ especially at the national level.

"Those are the ones who will go to the finance people and tell them‚ 'This is our plan - we need so much'.

"Not the coach. The coach has to work with his technical people and focus."

Mashaba said that he had first-hand experience of Safa‚ and what needs changing at the association‚ and therefore was backing the NFCF.

Mashaba was Bafana coach from July 2014 until December 2016‚ qualifying for the 2015 Africa Cup of Nations‚ but failing to reach the 2017 Afcon.

He was suspended‚ then fired‚ for a televised rant at his Safa bosses‚ including president Danny Jordaan‚ after the 2018 World Cup qualifying win against Senegal in Polokwane in November 2016.

Masombuka said the forum would lobby and pressurise Safa in an attempt to have the association change rules in their constitution that make two prospective candidates for the association's March 24 presidential election - Lucas Radebe and Mwelo Nonkonyana - ineligible.

He said the NFCF would also campaign among Safa's regions - whom the Jordaan camp has already claimed to have overwhelming support in - to back a change in leadership at the association.