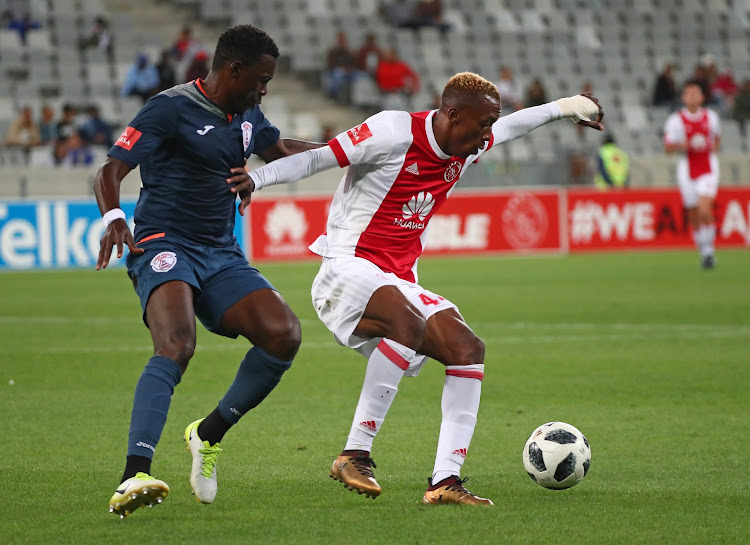 Yannick Zakri made his debut for Ajax Cape Town, but there would be no fairytale goal as the Premier Soccer League strugglers were held to a 0-0 draw by Free State Stars at the Cape Town Stadium on Friday.

The match was played in very windy conditions and chances were at a premium, though Stars will go away the happier side with the point and remain in fourth in the league.

Ajax are second from bottom still, and have also played a game more than their fellow relegation candidates.

The Urban Warriors were without striker Tendai Ndoro after his registration was called into question with the news that it might have fallen foul of FIFA regulations.

Players cannot feature for three clubs in one season, yet Ndoro has played matches for former clubs Orlando Pirates and Al-Faisaly from Saudi Arabia, and Ajax in this campaign.

Instead Zakri was handed a debut, while midfielder Grant Margeman made a return after six weeks on the sidelines.

There was little in the way of clear-cut chances in the first half, the best falling to Zakri when a mix-up between Stars goalkeeper Ali Sangare and his defence allowed the Ivorian to nip in and poke the ball towards goal, but for the gloveman to make a desperate stop.

Zakri earlier had another chance when he was fed from the right-hand side by Fagrie Lakay, but couldn’t steer his shot on target.

The same two players combined in the second half too as Lakay’s corner was met at the near post by Zakri, but he skied his volley over the bar.

Stars had a rare raid into the Ajax box just past the hour-mark, but Siphelele Mthembu could not force the ball home when home goalkeeper Brandon Petersen failed to collect a low cross.

Former Ajax midfielder Nhlanhla Vilakazi then went even closer when the home defenders stood off him and he curled a 30-yard shot onto the crossbar.

At the other end, Sirgio Kammies’ cross just eluded Yagan Sasman at the back post with the goal gaping.

The final chance fell to Lakay, whose turn saw him in space on the edge of the box, but he fired his shot well wide of the goal.

Next up for Ajax is a home meeting with Orlando Pirates on Wednesday, while Stars are at home to Baroka FC next Saturday.

In another Absa Premiership match played at the Harry Gwala Stadium, the home side threw away a lead in a 1-1 draw against Chippa United.

Zimbabwean striker Evans Rusike put United ahead in the 64th minute for his 7th league goal of the season but the home side's lead lasted just six minutes as Mxolisi Macuphu equalized for the visitors.

The Nedbank Cup Last 32 draw threw up a number of all-Premier Soccer League ties including a meeting between Kaizer Chiefs and Lamontville Golden ...
Sport
4 years ago

Free State Stars coach Luc Eymael has reiterated that his club will not stand in the way of players who want to leave amid reports this month that ...
Sport
4 years ago
Next Article