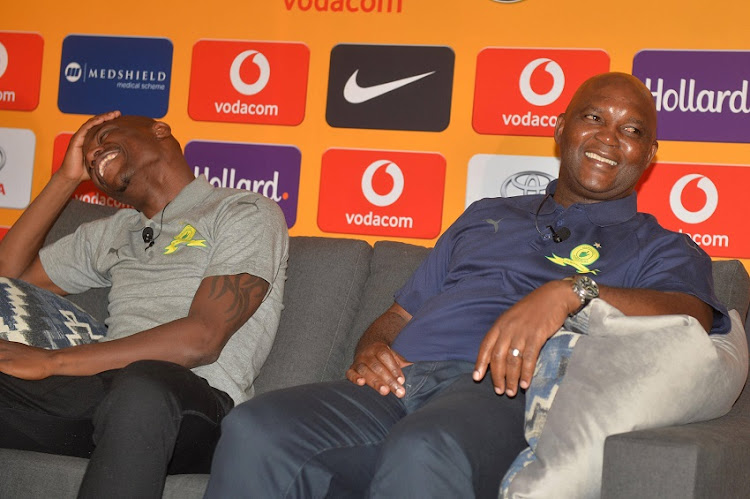 Jeremy Brockie may not start against Kaizer Chiefs this weekend‚ Mamelodi Sundowns coach Pitso Mosimane said as an assurance to Amakhosi goalkeeper Itumeleng Khune as the mind games in the buildup to the big match at FNB Stadium began on Wednesday.

Speaking at the pre-match press conference for Saturday's Absa Premiership matchup (kickoff: 8:15pm)‚ Khune was asked about his on and off-field rivalry with new Downs signing Brockie.

The Chiefs keeper has had his run-ins with the Kiwi sniper not just on the field‚ but on social media too - and now faces the prospect of stopping Brockie as part of Downs' most dangerous attack in the country.

"I mean‚ it's every goalkeeper's target to keep a clean sheet.

"We hate conceding‚ even at training‚" Khune said.

"And me versus Brockie - I wouldn't really make it's more of a rivalry.

"It will be Chiefs playing Sundowns on the night.

He added‚ half-jokingly: "But I will have my defenders who will have to deal with Brockie.

"I'll just be there guiding them‚ telling them where Brockie is‚ so that I don't have to make saves on the night."

Later Mosimane responded that Sundowns might not even opt to start Brockie‚ who looked sharp on his Brazilians debut in Saturday's 3-0 win against Platinum Stars at Loftus Versfeld on Saturday.

"Yes we are playing a good team that has got as better defensive record than us‚" Mosimane said‚ referring to Chiefs' second-best goals conceded in the PSL of 11.

"But I like to look at the opposite side. I think we score more. And that's a fact.

"I appreciate an open game. I appreciate attack. That's why I'm talking about a 4-4 or 4-3 (scoreline). Because that's what I want.

"But we will respect Kaizer Chiefs - they have done very well. And I think 'Itu'‚ you can rest - maybe Brockie will not start.

"Brockie is coming to help us in the Champion League. He scored 10 goals in the Confederation Cup (for SuperSport United last year).

"That's why we spent money on him - because he can help us on the continent.

"The guys we have at the moment have put us on top of the log. The new guys came on in our last game (the 3-0 win against Platinum Stars) when the game was already wrapped up.

"And the guys who we have had we believe in."