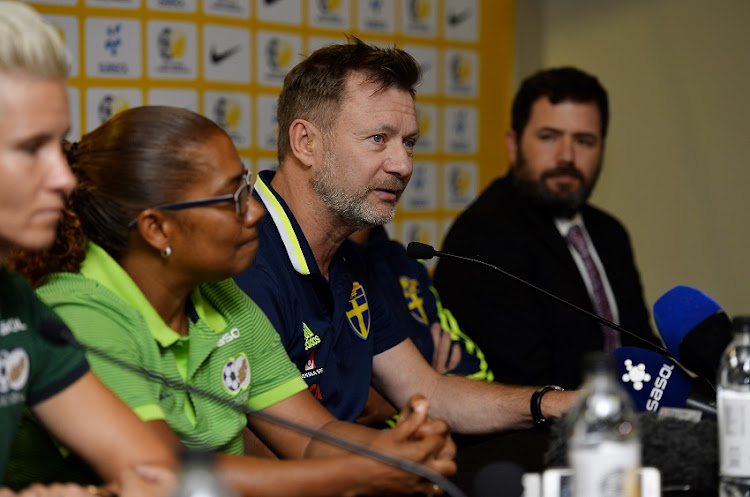 Sweden beat South Africa 3-0 in an international friendly in Cape Town on Sunday‚ but were made to work hard for their victory and were thankful for missed chances from the home side.

Gerhardsson was impressed with what he saw and believes that with better organisation and training at professional clubs abroad‚ there are some genuine potential stars among the Banyana players.

“They are very technical and speedy‚ in the first half we had problems with the long balls behind our backline. I think it was two times they had good chances to score‚” Gerhardsson said.

“We have played three games before with me [in charge] and no team‚ Croatia‚ Hungary or France‚ has created the same opportunities.

"This was a more difficult game than against Hungary and Croatia.

“There are some very good players‚ if they get more structure in the way to play‚ they will get better.”

Gerhardsson likened the South African players to Malawian international Tabitha Chawinga‚ who has been scoring for fun in the Swedish league and has similar traits.

“In Sweden we have a player from Malawi‚ Tabitha Chawinga‚ and she scored 24 or 25 goals. Also a speedy‚ technical player. Put that in a good organisation and good training‚ it can be good.

“You [South Africa] need tough games and good training. I don’t know what they have for preparation in the clubs [locally]‚ but that is important.

"It is the same in the Swedish league‚ I have players who play in France‚ Germany and England‚ and they have a little bit better training [than in Sweden].”

Gerhardsson was also impressed with the turnout of around 12‚000 for the game‚ as well as the atmosphere in Cape Town.

“It was fantastic‚ the girls are not used to playing in such a big arena. It was noisy‚ it was an atmosphere and the pitch was good.

"We enjoyed it very much. We hope we can come back next year‚ we will see …”