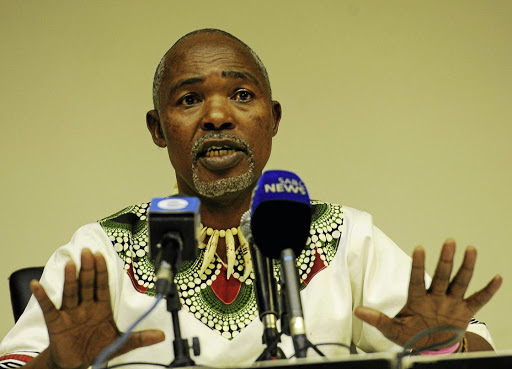 SA Football Association (Safa) presidential hopeful Chief Mwelo Nonkonyana insists his pending case against the federation, which is before the courts, won't preclude him from challenging Danny Jordaan for presidency on March 24.

The case will be heard at the South Gauteng High Court in Johannesburg on January 29.

"I was unfairly removed [in October 2014] but fortunately the court is going to finalise that judgment on January 29," he told the media at a hastily arranged conference at FNB Stadium yesterday - just next door to his sworn enemies at Safa House.

Nonkonyana admitted that his relationship with Jordaan had deteriorated to a point that they had not been on speaking terms until they crossed paths at an ANC gig in East London last weekend.

The chief of AmaBhala clan in the Eastern Cape further insinuated that "there's mudslinging that seemingly may come my way".

"There is already the question of [my] eligibility and that I owe Safa money," he said.

"In fact, Safa is owing me a lot. Why didn't they execute that judgment and attach my property? Clearly there is a ploy so that there should not be anybody to challenge for [the] presidency."

Safa national executive member Mzwandile Maforvane maintained that Nonkonyana was not eligible to stand for elections, saying: " [The] Chief has lost cases with costs against Safa at regional and national level."

Nonkonyana, however, said he was consulting widely.

"I'm told Lucas Radebe was also suggested to stand for Safa presidency, but he was said to be not eligible - clearly there is a strategy that nobody should challenge for change."

Gauteng, meanwhile, has chosen their preferred candidates for the March 24 polls.

They have Jordaan for president, with Natasha Tsichlas, Louis Tshakoane and Anthony Reeves making the national list, while Willie Mooka (Safa Tshwane president) and Pius Nqandela (Safa West Rand president) have been seconded as provincial nominees.