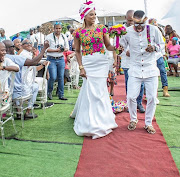 The Kaizer Chiefs’ attacking midfielder married the mother of his daughter Zoe-Lee at a ceremony held in Limpopo.

The event was attended by a number of his teammates as well as celebrities such as Minnie Dlamini-Jones and Black Coffee and Enhle.