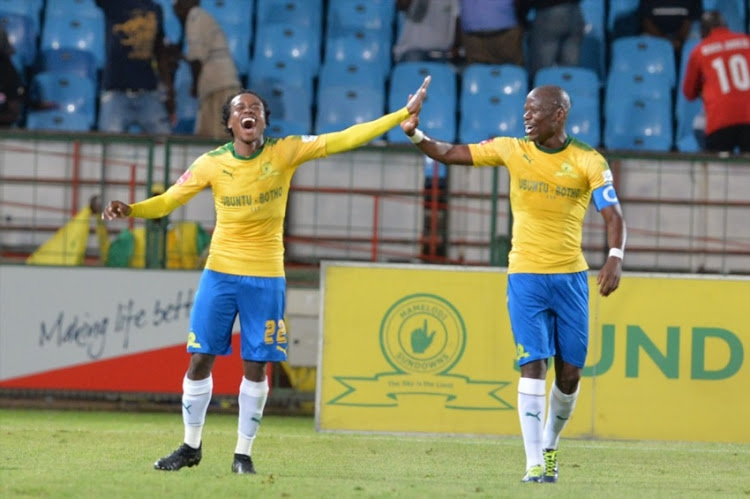 Percy Tau celebrates his goal with Hlompho Kekana during the Absa Premiership match between Mamelodi Sundowns and Maritzburg United at Loftus Versfeld on December 13, 2017 in Pretoria.
Image: Lefty Shivambu/Gallo Images

Mamelodi Sundowns cleaned up at the Premier Soccer League's monthly awards on Thursday‚ winning the coach and player prizes for December‚ and goal of the month for November.

Downs coach Pitso Mosimane won coach of the month for Sundowns‚ winning four and losing one of their five matches in December.

Percy Tau was the first player in the history of these monthly awards to be unanimously selected by the judges for player of the month.

He scored four goals in December.

Hlompho Kekana won goal of the month for his strike from within his own half in the Brazilians' 3-1 win against Orlando Pirates at Orlando Stadium on November 1.

Mosimane said Sundowns' form in November and December had pushed his side to being where they are now‚ on top of the log.

"The people next to me here made me coach of the month because they played‚" the coach said at the presentation at the PSL offices in Parktown.

"The technical team‚ everyone involved in the club‚ all played a role.

"I guess in November and December we had a bit of a honeymoon period because we won six and lost one.

"But I think the big part of it was that we conceded one goal in those six games. And that gave us the opportunity to be top of the log now."

Tau scored a brace in Downs' 4-0 win against Baroka FC and single goals against Maritzburg United and Bloemfontein Celtic.

The goal of the month award is voted for by supporters.