Downs make history even in defeat 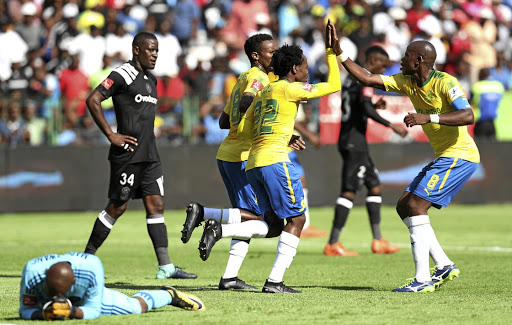 In football, history remembers the winners but there are situations where the losers can take something out of a defeat.

Mamelodi Sundowns supporters will quickly want to forget their 3-1 loss to Orlando Pirates at Loftus Stadium last weekend, but that match will go down in the Brazilians' history as one of their most important.

Percy Tau's goal on the day ensured that the Tshwane side became the first team to score 1000 league goals in 671 matches since the PSL inception in 1996. This does not include cup competitions.

The first ever Sundowns league goal was scored by Joel "Fire" Masilela during their
1-0 win over Vaal Professionals on August 18 1996.

The most goals Mamelodi Sundowns scored in a season were 70 in 34 matches during the 1998/99 season when they won the league.

Masilela was not available to share his memories of that goal, but his former teammate, Themba Mnguni, recalls how the winger used to tear defenders apart, especially in the 1996 season.

"Fire was coming from the junior ranks, so he wanted to prove a point of saying he deserved to start, and remember [Mamelodi] Sundowns had one of their best ever squads," Mnguni recalled.

"So he was extremely exceptional. For the team, there were not too many changes and it helped us a lot.

"The way the current Sundowns team plays reminds me a lot about our playing days," he added.

Since 1996, Sundowns have amassed seven league titles, which is a record in the PSL.