Steve Komphela smiling after Kaizer Chiefs get the job done 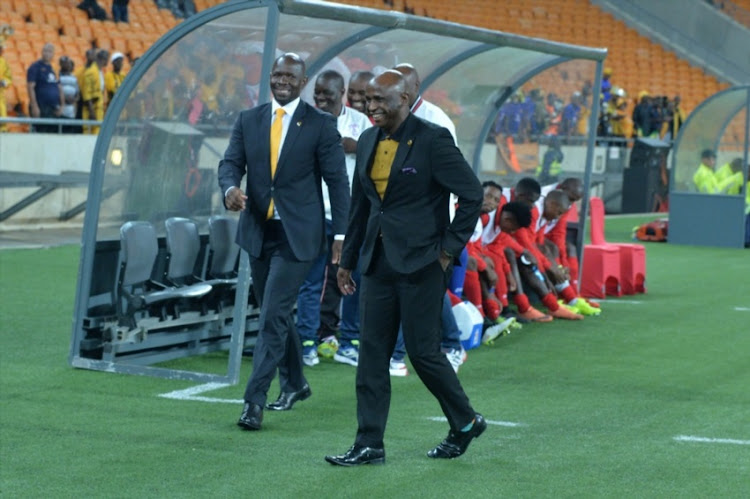 With the traffic getting tighter near the summit of the Absa Premiership table‚ Kaizer Chiefs coach Steve Komphela wants to keep his team hanging in there until they catch and bypass pacesetters Mamelodi Sundowns.

Amakhosi are still trailing Sundowns by five points after an exhilarating weekend of football - the 17th round in which Orlando Pirates and Free State Stars also made tremendous strides towards the league title.

"I think the race is still open‚" said Komphela‚ whose team's league chances were boosted with their come-from-behind 2-1 victory over Polokwane City at FNB Stadium on Saturday night.

"You could easily say it's game on.

"And not only to us but everybody.

"Sundowns are still in with a shot and Orlando Pirates have just created opportunities and there is still a lot of matches to play.

"A win is great for your people and staying in the race.

"Keeping in check with the rest of those who are slightly above you is vital. But it was an important win for us."

Dumisani Zuma came off the bench to give Amakhosi the much-needed three points‚ with his header from a good cross of Joseph Molangoane in the 66th minute making all the difference against a fighting Polokwane side.

"With regards to the five points gap‚ it's good‚" said Komphela.

"We have to keep hanging in there and we need to at least kill two other matches.

You can't hope that Sundowns will loose two matches just with ease.

"You have to concentrate on yourself and keep pushing and pushing and hoping that we'll catch them and bypass them.

"So the league is going to very difficult.

"There's going to be three or four teams easily competing for it."

Komphela‚ who was celebrating 100 games in charge of Amakhosi on Saturday‚ said he was delighted with his team's fighting spirit after going 1-0 down to Walter Musona's thunderbolt free kick from 30 yards in the 22nd minute.

Ryan Moon‚ in his first start this season‚ ghosted in from the near post to head in Siphiwe Tshabalala's corner kick in the 31st minute to open his scoring account.

"I thought it was a great comeback‚" said Komphela.

"When you are one zero down‚ nerves start to rise and confidence gets extended a bit.

"But I thought we kept calm and eventually got ourselves an equaliser‚ which made things easy for us.

"It's not easy to play against this Polokwane team and I think the coach (Bernard Molekwa) has done a tremendous job. The threats are clear.

"These guys have won matches where you thought 'goodness me how are they doing it'.

"They gave us a hard time.

"But after 1-1 then we could see that it's getting even and we got our confidence back.

"We are delighted that we won and I thought it was a good match to watch.

"There were stages where we got threatened and even at 2-1 they could have got an equaliser.

"We need to concentrate more‚ lapses of concentration‚ you cannot do that when you having people like (Jabu) Maluleke playing in the middle.

"They were very calm in their midfield‚ playing the ball you could feel on the park as they push it.

"It's with purpose. But I thought we could have buried the match so that you don't get anxious in the end.

"We are delighted with the three points and happy for (Siphelele) Ntshangase (who made his debut) but there are a lot of stuff that we still need to work on with him.

"I thought after we made that sub (Ntshangase) you could see that it was starting to open up.

"Moon (Ryan) as well had a good match and a good goal. Zuma's goal was also unbelievable. I thought all three goals were tremendous."

Up next for Chiefs is their away encounter against Baroka FC in Polokwane on Sunday.

Amakhosi will go to that match aiming for two things: revenge against a Baroka side that beat them 2-1 in Durban in September and the three points that will keep them in the title race.