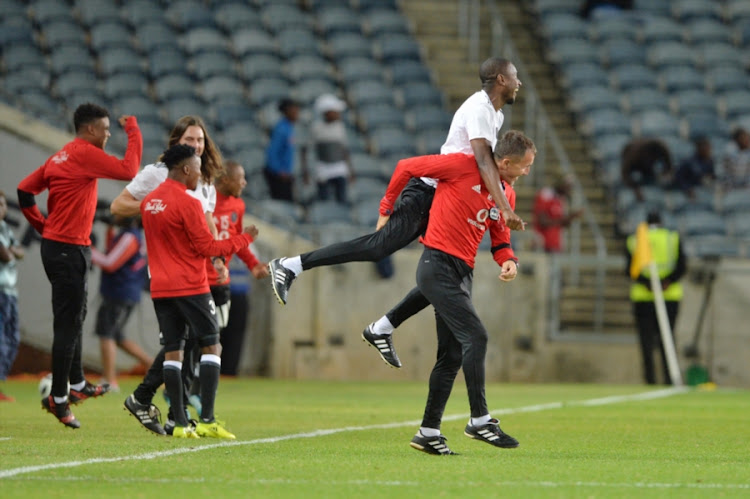 Orlando Pirates threatened to run rampant, then were contained by Baroka FC, but a 3-1 Absa Premiership victory at Orlando Stadium on Saturday night was still Bucs' most convincing at home this season.

Flashes of brilliance from Pirates hinted at a more forceful second half of 2017-18 from a team who came into Saturday's game in eighth place.

Luvuyo Memela was the influential player in Bucs taking a half-time lead that would remain the final scoreline with an assist to Musa Nyatama's sixth-minute opener and goals in the 19th and 28th.

Baroka forward Mduduzi Mdatsane pulled one back with a penalty in the 30th.

This was just Pirates' fourth home win of the season, and their first since a 1-0 victory against Cape Town City at FNB Stadium on September 19.

Their long dry spell at Orlando (they last beat Ajax Cape Town here on September 12) had been put down to a circumspect approach at home by coach Milutin Sredojevic, sitting deep and sussing teams out in the first half, then attacking from the break.

Sredojevic appears to have utilised the Christmas recess to come up with a more aggressive strategy from the start of home games. The results were there to see.

Inspired Bucs were on the front foot from the start, utilising forwards Memela and Justin Shonga and midfielders Thabo Matlaba and Nyatama to pry Baroka open with incisive movement and passing.

The end result was Pirates' second win from 11 matches.

Bucs were rampant in the opening 25 minutes.

From a short free-kick near the corner flag on the right Memela touched to Kutumela, then crossed, and Nyatama was left free for a gift header past Virgil Vries.

Shonga is growing into his playmaking centre-forward role. His drive was palmed over by Vries. From the resultant corner by Memela Innocent Maela headed onto the upright.

Shonga set up the second with sheer class, turning left-back Punch Masanamela twice, then feeding Mothokozisi Dube inside, who went to the goalline and squeezed a ball across the face that Memela produced a sharp finish to at the near post.

Memela scored his second with a delicious side-foot past Vries having been put through by Matlaba.

Baroka pulled one back after Gladwin Shitolo clattered down Lucky Nguzana, Mdatsane stepping up for an audacious chipped penalty past Jackson Mabokgwane.

It's not often you'll see a team 3-1 up huddling at the whistle for the break. Bucs seemed to feel they had let Baroka off the hook to some extent , and their determination to press the advantage was encouraging.

From another troublesome Memela corner after the restart Nyatama headed straight at Vries. But Bucs struggled to press a further advantage, a more composed Baroka denying penetration.

Chiefs fail to capitalize on Sundowns' defeat with draw against SuperSport

Kaizer Chiefs failed to give their legion of fans a fitting birthday present after they were held to a thrilling but goalless Absa Premiership draw ...
Sport
4 years ago

Bradley Ralani‚ unknown in South Africa but with seven years of overseas experience‚ is set to make his Premier Soccer League bow at the age of 30.
Sport
4 years ago

Steven Pienaar has the technique and experience to contribute to one of the Premier Soccer League’s big teams.
Sport
4 years ago

Highlands Park will take a two-point lead into the second half of the National First Division season as they seek a quick return to the topflight ...
Sport
4 years ago
Next Article