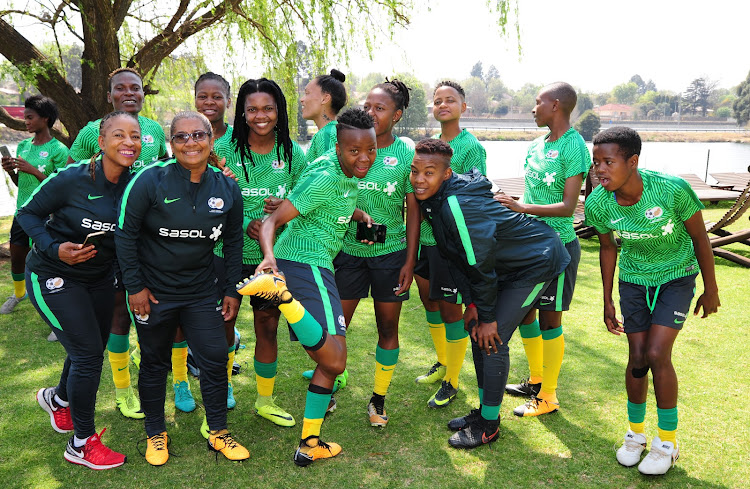 A group picture of players with coach Desiree Elise during the SASOL Press conference in Benoni on 10 September 2017.
Image: Aubrey Kgakatsi/BackpagePix

The year ended a good note for the South African senior national women’s team after Banyana Banyana and 21-year old attacking midfielder Thembi Kgatlana where nominated for the Caf Awards to be held on 4 January 2018 in Accra‚ Ghana.

The announcement that Banyana and Kgatlana made the shortlist for the top three of Caf awards was made earlier this week by the football controlling body on the continent.

Banyana are up against tough competition in the form Ghana and Nigeria U20 national teams in the category of Women’s national team of the year and there is optimism that South African will come up tops.

On the other hand‚ the Mohlakeng-born Kgatlana faces stiff competition from Nigeria’s Asisat Oshoala and Gabrielle Aboudi Onguene of Cameroon for the women’s player of the year award to enhance her growing reputation as one of the best players on the continent.

The nominations comes on the back of Banyana Banyana’s successful run in the Cosafa Cup Championship where they beat hosts Zimbabwe 2-1 in the final at in Bulawayo in September for their fourth victory in the competition.

In the process‚ interim head coach Desiree Ellis has made history by becoming the first South African‚ male or female‚ to win the Cosafa Cup Championship both as a player and a coach which is a commendable feat.

Ellis‚ who is a former Banyana Banyana captain and fans favourite to be given the job on a full-time basis‚ won her first gold medal in 2002 as a player and repeated the feat as a coach this year.

However‚ it does not get any easier for Banyana Banyana in the new year as they will be involved with the qualifiers for the 2018 Africa Women Cup of Nations where they have received a first round bye together with Nigeria‚ Cameroon and Equatorial Guinea.

In April‚ Banyana Banyana will play against the winner of the first round match between Lesotho and Swaziland to progress to the nest round of the qualification programme that will bring them closer to booking a ticket to the tournament in Ghana.

Qualification for the 2018 Africa Women Cup of Nations is vital as the winner‚ runner-up and third-place sides in Ghana will qualify for the Fifa Women's World Cup to be hosted by France in 2019.

To prepare for what is going to be a tough 2018‚ Safa has organised two friendly matches for Banyana Banyana against one of the tough European sides in the form of Sweden on January 18 and 21 in Cape Town.

“A match against Sweden is another step for Banyana Banyana as we build towards two major competitions‚ the qualification for the 2018 Africa Women’s Cup of Nations in Ghana and the 2019 Fifa World Cup in France.

This is a chance for the South African Senior Women’s national team to go to the next level‚” said Safa president Danny Jordaan.

Abandoned clash between AmaZulu and Celtic to be replayed in January

The abandoned Absa Premiership clash between AmaZulu and Bloemfontein Celtic will be replayed on January 24 and will start from scratch‚ the Premier ...
Sport
4 years ago

Outspoken Cape Town City coach Benni McCarthy has claimed that the club are victimised by referees because of their sponsorship dispute with the ...
Sport
4 years ago
Next Article