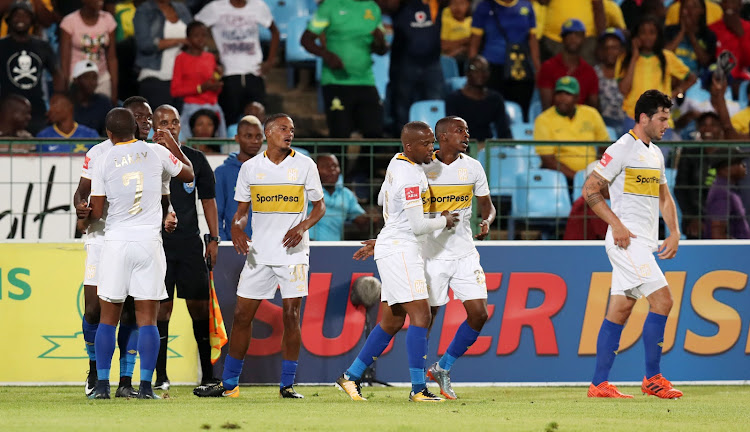 Mamelodi Sundowns’ four match winning streak came to a screeching end as they were narrowly beaten 1-0 by Cape Town City in their lively Absa Premiership encounter in Pretoria on Tuesday night.

The only goal of the match was scored by Nana Akosah-Bempah in the 27th minute as the Citizens continued their dominance over the Brazilians after they beat them home and away last season.

This was also City’s second win in succession following their 1-0 win over AmaZulu at the weekend.

Sundowns came into this match on the back of four successive league victories over Baroka FC, Golden Arrows, Maritzburg United and Bloemfontein Celtic where they scored an impressive ten goals and conceded only three.

Though they lost a match at home, the Brazilians remain top of the standings with 28 points from 14 matches but to their advantage they have a game in hand as most of the teams in the league have already played 15.

As a result of this hard fought victory away from home, City have moved from fifth place to second spot on the log after 15 matches, they trail Sundowns by four points and they will go to the Christmas break as the second best team in the country.

This defeat against City was Sundowns’ first since they were stunned by 2-1 by AmaZulu through late goals by veteran strikers Mabhuti Khenyeza and Siyabonga Nomvethe at Lucas Moripe Stadium in October.

When they come back from the break, Sundowns are up against Polokwane City, Ajax Cape Town, Orlando Pirates, Platinum Stars and Kaizer Chiefs and Mosimane will be hoping to get at least nine points to maintain their advantage at the top.

City opened the scoring in the 26th minute when Akosah-Bempah slotted the ball beyond the outstretched hands of Sundowns goalkeeper Denis Onyango after he received a pass from the right flank by Aubrey Ngoma after a quick counter attack.

City once again breached the Sundowns defence three minutes before the break when Ngoma supplied a defence spitting pass to unmarked Roland Putsche whose close range shot was saved by Onyango who moved out of his line.

Sundowns upped the tempo in the second half with the likes of Percy Tau, Themba Zwane, Tiyani Hlompho and Thokozani Sekotlong leading most of their attacks but they could not find a way past City goalkeeper Sage Stephens.

Love him or hate, 'Huntie' has done a lot for soccer

The Pretoria sides are holding up the Premier Soccer League Christmas recess and with good reason; they still have to make up their games in hand.
Sport
3 years ago

Benni McCarthy says he does not need to motivate his Cape Town City players for Tuesday’s Premier Soccer League clash away against Mamelodi Sundowns ...
Sport
3 years ago

Midfielder Roland Putsche scored six minutes from time as Cape Town City beat AmaZulu 1-0 at home on Friday to move up into second place in the ...
Sport
3 years ago
Next Article