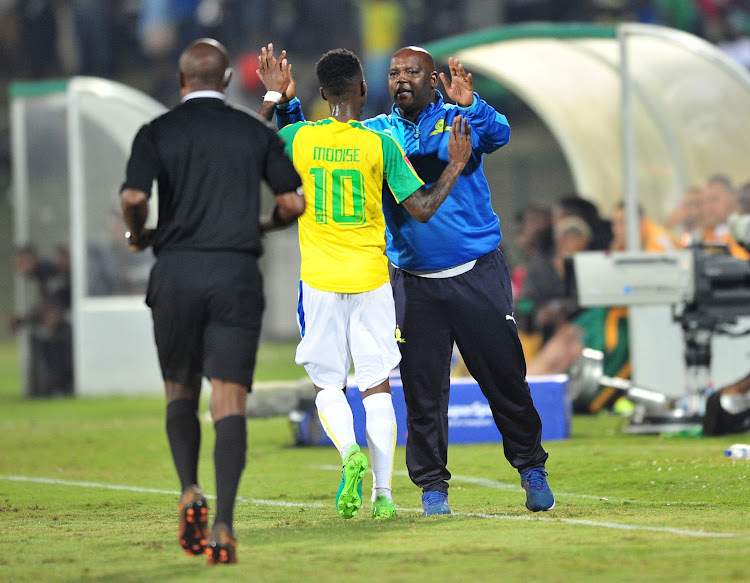 Mamelodi Sundowns coach Pitso Mosimane bears no grudges towards Cape Town City midfielder Teko Modise and he is willing to shake his hand when they meet for their Absa Premiership encounter at Loftus on Tuesday.

Modise recently made explosive revelations in his tell-all book‚ 'The Curse of Teko Modise'‚ where he said he was not on speaking terms with Mosimane in the final two years of his career at Sundowns.

But‚ as they are about to meet for the first time since the release of Modise’s book‚ Mosimane said he is willing to shake his hand because “he has not done nothing wrong to me”.

“Why not‚” was Mosimane’s quick reply when asked if he will be willing to shake Modise’s hand.

“He has done nothing wrong to me‚ I only want to remain with the good memories I had with him.

"I saw the goals he scored‚ the passes he made‚ he is a legend‚ a very good footballer and talent‚” the Sundowns coach said.

Mosimane added that he is happy to have played a part in Modise’s career where he wrote a good story for himself.

“I am happy that I was part of his story with him from the beginning to the end and it is a good story.

"I always told you in the media that as long as he was at Sundowns‚ he will remain like Surprise Moriri or any other legend of the club.

"He opted to go‚ he wanted game time and he was right because he was not playing here and why must he stick around?

"It was very difficult for him because Tiyani Mabunda has got quick and strong legs‚ Hlompho Kekana is still in the space and I play two in the midfield.

"So it was a little bit of a difficult situation‚ he was right to go and play elsewhere‚” he said.

Reflecting on Sundowns' 4-1  thumping of hapless Bloemfontein Celtic on Saturday‚ Mosimane said he was happy that they controlled the game against a team that likes to play good football and does not sit back.

“What helped us were the goals‚ in the first half we controlled the game as usual but we couldn’t get behind them.

"I told the players at half time that we must not repeat the performance against Kaizer Chiefs where we dominated the game but did not have the goals.

“We had a nice good talk during the break that we must try to get behind them and get the goals.

"We got the first goal from Thokozani Sekotlong and I am very happy for him that he scored.

"He needed the break and it is incredible that whenever he starts he scores.

"They play good football‚ their midfielder Lantshene Phalane is the one who was giving us problems with his left foot and diagonal passes and I was happy when he was substituted.”