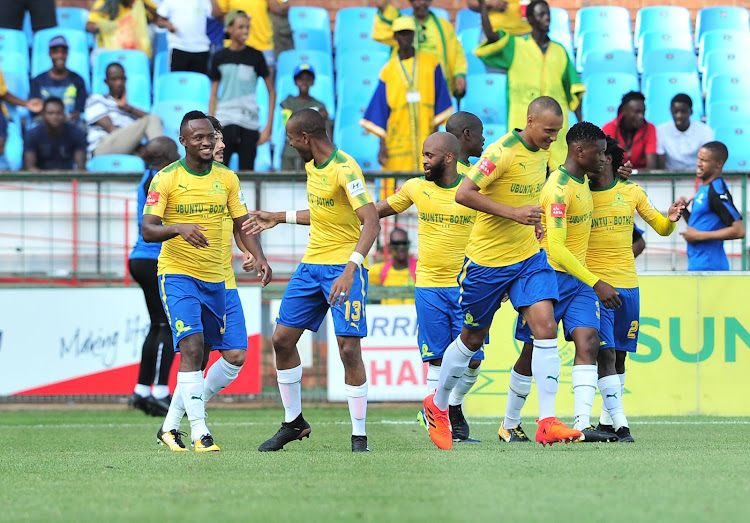 Mamelodi Sundowns boosted their title credentials with a thorough 4-1 thrashing of Bloemfontein Celtic at Loftus Versfeld on Saturday afternoon.

There is no doubt that turbulence awaits on the way to the finishing line in the second round but if they continue with this current form, it will soon become a matter of when rather that if they will dethrone Bidvest Wits.

Pitso Mosimane’s men have increased their tally of points to 28 from 13 matches and the extent of their lead at the top of the pile will be clear by the end of the weekend when all the teams have completed their assignments.

This impressive victory over stubborn Bloemfontein Celtic was secured through second half goals Thokozani Sekotlong, Tiyani Mabunda, Percy Tau and Themba Zwane as they sent out a powerful message to the rest of the chasing pack.

The Brazilians have registered their fourth league win in a row and this run may continue on a positive note on Tuesday night against when they host resurgent Cape Town City in their last match of the year here at Loftus.

To their credit, Sundowns are also on a seven match unbeaten run which includes six wins and one draw and the last time they lost was in October when AmaZulu stunned them 2-1 through late goals by veteran strikers Siyabonga Nomvethe and Mabhuti Khenyeza.

When they return from the Christmas break, Sundownns’ first four league matches are against Polokwane City, Ajax Cape Town, Orlando Pirates and Platinum Stars and Mosimane will be hoping that his charges have not lost any of their sharpness.

For Celtic, who played this match without their coach Veselin Jelušić, who is attending a coaching course in Europe, they did not have answers to the tough questions that Sundowns asked in the second half.

Caretake coaches Lehlohonolo Seema and John Maduka will hand over the team to Jelušić when he returns with some work to do as they may end the year outside the top bracket on the log as they are under pressure from Chippa United, Free State Stars, Maritzburg United and Golden Arrows on the middle of the table.

Sundowns showed their intentions of winning this match from the beginning as they pressurized Celtic in the opening exchanges by launching a number of attacks in their goalmouth.

However, the best chance of the match went the way of Celtic as a close range shot by wasteful attacker Victor Letsoalo brushed the upright of Sundowns goalkeeper Denis Onyango after they caught them the counter attack in the seventh minute.

Tau, who received a standing ovation from the appreciative fans when he was replaced George Lebese in the 85th minute, was denied by the crossbar with Celtic goalkeeper Patrick Tignyemb beaten after he received a pass from Sekotlong after nineteen minutes.

Letsoalo failed to punish the Sundowns defence as he looped his effort over the crossbar after he managed to beat Motjeka Madisha to the ball inside the penalty box much to the disapproval of the small Celtic fans.

On the stroke of half time, Letsoalo was again guilty of lacking the killer instinct when he ballooned his effort over the crossbar from close range after he was released by Jacky Motshekwa.

The second half turned out to be a goal fest and the party was started by Sekotlong two minutes after restart when he drilled home a powerful close range header from a corner kick that was taken by Tau.

Midfielder Mabunda increased Sundonws’ their lead in the 53rd minute with a thunderous shot from outside the box before Ronald Pfumbidzai equalized just after the hour mark.

Sundowns were not finished as Tau and Zwane scored two more goals as their fans on the stands started shouting for the fifth goal and Celtic well beaten.

In another match at the Nelson Mandela Bay Stadium in Port Elizabeth, Rodney Ramagalela scored his 8th league goal of the season to guide Polokwane City to a vital away win against the home side Chippa United.