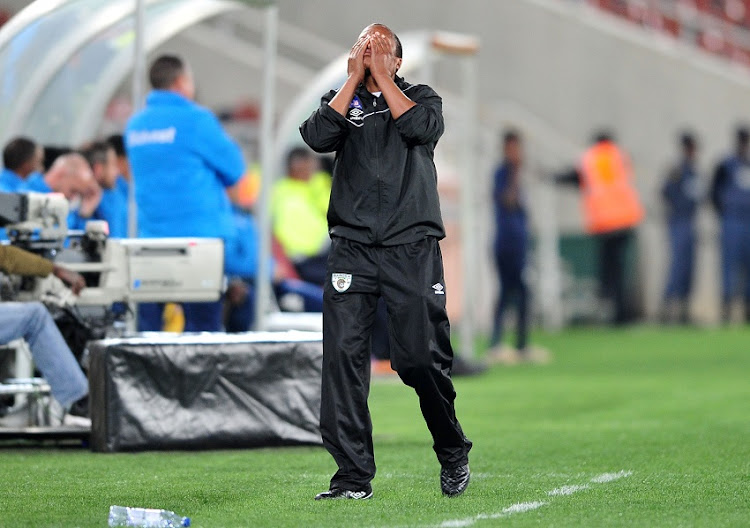 Baroka FC coach Kgoloko Thobejane has admitted that they find themselves in a spot of bother at the moment as a result of leaking seven goals while failing to score in their last two matches in the league.

Last week‚ Baroka lost 4-0 to runaway leaders Mamelodi Sundowns and 3-0 to Maritzburg United in a space of three days to drop from the top of the standings to seventh.

They take on SuperSport United at Peter Mokaba Stadium in Polokwane on Sunday in their last match of the year and Thobejane wants a strong reaction from his players as they go in search of their first league win in seven outings.

“This week we had a number of things to work on because we conceded seven goals and failed to score in our last two matches‚" he told TimesLIVE in Thursday morning.

"It is not good because we can’t shut the back door and we also can’t find openings.

"Obviously there are tactical things that we work on at training but we focused mainly on the defence and finishing and hopefully the players will get it right against SuperSport United in our last match of the year.” During the frustrating spell of almost three months where they have failed to win a match after seven starts‚ Baroka lost three times and managed four draws since they beat Kaizer Chiefs 2-1 at the end of September.

Baroka FC coach Kgoloko Thobejane has likened his working relationship with Kaizer Chiefs legend Doctor Khumalo to a fire that he says will take some ...
Sport
4 years ago

“We are having a serious problem of scoring and I am looking for a striker who can come and help the players that we have in the team‚" he said.

"It is really frustrating because we create chances but just can’t put the ball in the back of the net.

"But‚ we will continue to work hard at training and hopefully we will get it right.”

Looking ahead of the clash against SuperSport United‚ who are on a three match winless streak in the league‚ at the weekend‚ Thobejane said they will look to take advantage of them because they have confidence issues of their own.

“They have only managed two points from a possible nine and we must try to take advantage of that because they are not doing well.

"I have emphasized on my players that we must close the back door and also find openings because finishing chances has been our main problem‚” he said.

Thobejane said influential attacking midfielder Gift Motupa will not be available for the clash as he has not recovered from a groin injury that has sidelines him for several weeks while Lewis Macha is due for a late fitness test this week.