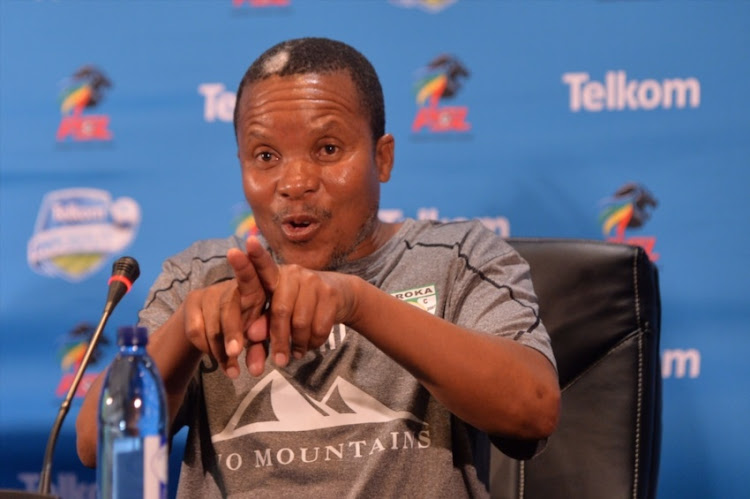 Baroka have gone seven matches in the Absa Premiership without a win‚ a run that includes three losses and four draws and which stretches back to their 2-1 win over Kaizer Chiefs in Durban at the end of September.

Last week they lost 4-0 to Mamelodi Sundowns and 3-0 to Maritzburg United in three days to drop from the top of the standings to sixth with 19 points from 14 matches.

Baroka are left with one match against SuperSport United at Peter Mokaba Stadium on Sunday before they go to the Christmas break.

“Kgoloko (Thobejane) is not going anywhere‚ we don’t want to create unnecessary panic because of a few bad losses‚” Mphahlele said.

“We have only lost three matches this season and we are three points away from Mamelodi Sundowns‚ who are top of the log.

“We are equal on points with Kaizer Chiefs‚ Bloemfontein Celtic and Chippa United‚ who are above us. Orlando Pirates‚ who are second‚ have one point than us and I want our fans not to panic but continue supporting the team.

“Sundowns took four points from us last season and Maritzburg took six‚ so these two have proved to be our hoodoo teams.”

If Baroka lose to SuperSport‚ and those around them on the log in the form of Chiefs‚ Celtic‚ Chippa United and Cape Town City get something out of their matches this week‚ Thobejane and his men will drop further down the standings.

Mphahlele said it was important for Baroka to get maximum points against SuperSport to end the year on a high and set the tone for the second round‚ where they resume with a blockbuster clash against Pirates at Orlando Stadium on January 6.

“If you look closer at our team‚ the boys have been playing well but our biggest problem has been finishing off the chances that we create. Scoring is something that we must get right against SuperSport and in the second round to stay in contention‚” Mphahlele said.

After the loss to Maritzburg on Friday‚ Thobejane lamented his side’s poor finishing as they went through their second match in quick succession without scoring a goal while letting in seven.

“It was not our turn on Friday night but that of Maritzburg. It was not a good night for us.

“Sundowns hammered us and Maritzburg hammered us but I did not think that we played that badly. In the first half against Maritzburg‚ we had more than 10 chances and we should have scored at least one‚” Thobejane said.