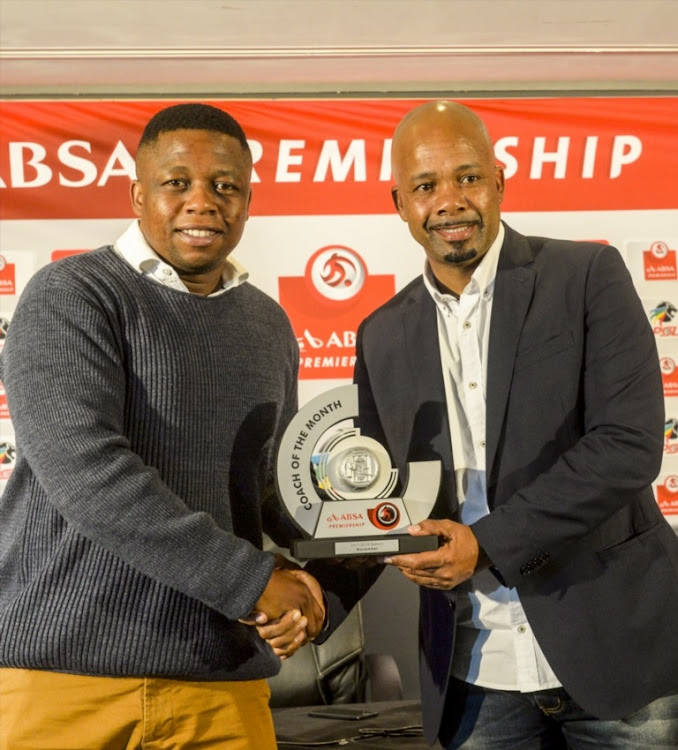 Coach Tebogo Moloi of Chippa United receives his award during the Absa Premiership Player and Coach (Nov) and Goal (Oct) of the Month Announcement at PSL Offices on December 11, 2017 in Johannesburg.
Image: Sydney Seshibedi/Gallo Images

Teboho Moloi watched other coaches make their way to the winner’s podium to accept the Coach of the Month award for many years and never imagined that the accolade would be awarded to him one day.

That day finally came when the Chippa United coach was named as the coach of the month for November at the Premier Soccer League’s (PSL) Parktown headquarters on Monday afternoon.

Moloi — who has been in charge of the Eastern Cape side since September after replacing Dan Malesela — said he could hardly believe his ears when United’s communications manager Luthando Zibeko told him that he had won the award for the first time.

‘‘It was a great surprise‚” said a delighted Moloi.

‘‘Eish‚ you know‚ the first time I saw (Golden Arrows coach) Clinton Larsen win this award I was still an assistant coach.

‘‘I congratulated him but he said to me the day I become a head coach I would also get a chance to win it.

‘‘When Trompies (Zibeko) told me that I had been voted as the coach of the month‚ it was a surprise because there are a lot of other great coaches who are doing a great job in this field of ours.”

Chippa United coach Teboho Moloi admitted that his side "were not in the park but were somewhere else" when they were humbled 1-0 by bottom of the ...
Sport
4 years ago

During the block of fixtures played in November‚ United picked up five points in the club’s three games.

The coach guided the side to an away win at champions Bidvest Wits and then drew with Free States Stars and Mamelodi Sundowns‚ only conceding once in those games.

The judges said they were impressed by the way he has turned the fifth-placed United around without making a radical change to their style of play since his arrival in September.

Sundowns midfielder Hlompo Kekana was named Player of the Month for November at the same event held at the PSL headquarters.

The judges said they leaned towards the influential player because he stood out for his impressive defensive work rate‚ leadership qualities and fighting spirit.

He also continued to score crucial goals for the premiership leaders in November.

Moloi said he would happily give up his award if he had to choose between the accolade and guiding United to a top three finish at the end of the season.

‘‘I always tell the guys here (at United) that accolades for me are not so important because at the end of the season I would really love to see Chippa among the top three‚” Moloi said.

‘‘If you could tell me that me not winning this award but Chippa finishing in the top three‚ I would be the happiest person.”