Thobejane will not 'kill' his strikers for not scoring 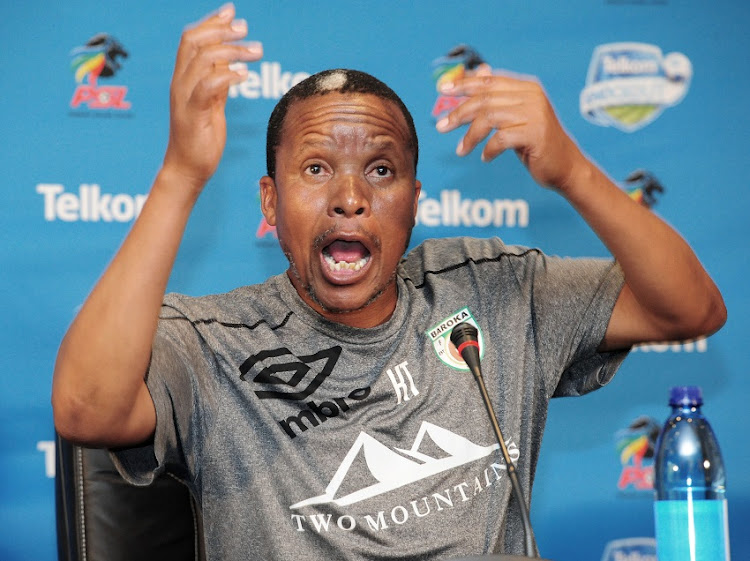 A visibly disappointed and humbled Baroka FC coach Kgoloko Thobejane said he won’t “kill” his forward players for firing blanks against Maritzburg United but will continue to motivate them so they regain confidence and start firing again.

Baroka failed to score for the second consecutive league match while conceding seven goals after a 4-0 drubbing by Mamelodi Sundowns and another heavy 3-0 loss to Maritzburg United at Harry Gwala Stadium on Friday night to drop to fourth on the standings.

By the end of this week Baroka‚ who have SuperSport United at home in their last match of the year‚ may drop even further down on the log with teams around them in action on Saturday and Sunday.

Baroka‚ who had the opportunity to regain their top spot with victory over Maritzburg‚ have gone seven matches in the league without a win‚ a run that includes three losses and four draws and stretches from their 2-1 win over Kaizer Chiefs at the end of September.

“You can’t kill the players if they don’t score goals. It was not our turn but the turn of Maritzburg‚” Thobejane said.

“It was not a good night for us. Sundowns hammered us and Maritzburg hammered us but I did not think that we were bad.

“In the first half‚ we had more than 10 chances and we should have scored at least one‚” he told SuperSport TV after the loss to Maritzburg‚ while admitting that his defence could have dealt with the situations that led to the three goals conceded.

“The defence could have done better‚ we did not close them down and they put it in the back of the net. You can see that Evans Rusike [who scored a brace for Maritzburg] is a finisher.

“This week we conceded seven goals and it is too bad. We have to go back to the drawing board and make sure that our game against SuperSport we win at all costs.

“It is not going to be an easy one but have to score goals to win and end the year on a high note.”

Baroka have one game remaining in 2017‚ against SuperSport United at on Sunday‚ December 17.

Bafana Bafana may have failed to qualify for next year’s Soccer World Cup but beleaguered coach Stuart Baxter and his players will not be twiddling ...
Sport
4 years ago

Premier Soccer League chairman Irvin Khoza‚ also chairman of Orlando Pirates‚ has hinted that he wants Mamelodi Sundowns to be held responsible as ...
Sport
4 years ago

Mato Madlala will continue as acting CEO of the Premier Soccer League (PSL) because a suitable candidate who has been found is tied up until ...
Sport
4 years ago
Next Article