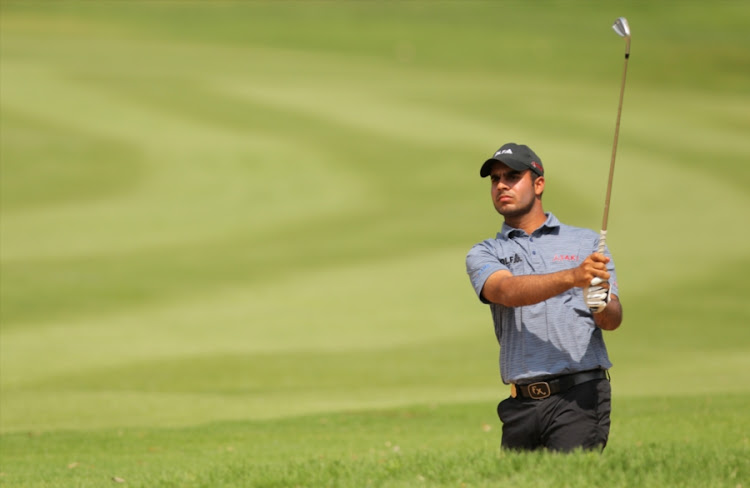 Shubhankar Sharma during day 2 of the Joburg Open at Randpark Golf Club on December 08, 2017 in Johannesburg, South Africa. EDITOR'S NOTE: For free editorial use. Not available for sale. No commercial usage.
Image: Petri Oeschger/Sunshine Tour/Gallo Images

Indian golf has always produced a steady stream of great players, with Jeev Milkha Singh and Arjun Atwal amongst those to have won on major tours around the world.

And now the country has a new star in 21-year-old Shubhankar Sharma, who on Saturday could become only the fourth foreign winner of the Joburg Open.

“This kid is definitely the real deal,” Atwal declared on social media, and Sharma has backed this up in Johannesburg this week.

He followed up a second round of 61 with a third round of 65 at Randpark’s Firethorn course on Saturday to lead by five strokes on 20 under par.

His golf has been impressive and he’s dropped only three shots in 54 holes. Starting the third round one stroke off the lead, Sharma certainly wasted no time making his move and made four consecutive birdies from the second hole on his way to taking the lead.

“I’m really happy. I wanted to play well because it’s always tough following up a low round with another good round. So I’m proud of myself,” he said.

He’d made a last-minute decision to come to South Africa for the first time and tee it up in this tri-sanctioned tournament between the Sunshine Tour, European Tour and Asian Tour.

Sharma originally had some visa issues to get here and almost decided to call time on what has been a long year of travelling for the young star.

“But I’m very pleased I decided to come to South Africa,” he said.

Yet the way the scoring has gone here, he may need every one of those five strokes on Sunday.

His nearest challenger is Swede Christofer Blomstrand on 15 under following a sublime 62 that included two eagles and two bogeys.

And Erik van Rooyen, still reveling in having gained his European Tour card through the grueling Challenge Tour this year, is the leading South African on 14 under and just as eager to make a run at Sharma.

“I learnt a lot on the Challenge Tour this year and it’s really prepared me for this next level,” he said.

But Sharma has remained very composed all week, even in a third round where a different wind changed the nature of the Firethorn course.

“It did play a bit differently, but there were still low scores out there,” he said. “So I’m just going to stay within myself because anybody can go really low on the final day.”

This is the first time in Sharma’s career that he will lead going into the final round of a big tournament. But he says it won’t change his approach.

“I’m going to keep playing aggressively. This is not the kind of course where you want to play conservative golf. It’s all right there in front of you, so I’m not going to change my strategy at all.”

Blomstrand worked his way into contention with a magnificent round that saw him go out in 29 and which was a highly apt 29th birthday present.

Apart from the R2.6 million in prize money for the winner or one of the three places on offer in the 2018 Open Championship, he’ll have an added incentive to claim a victory here.

Blomstrand wears a bracelet with the words “F*** Cancer” on it.

“I have had two family members who have passed away from cancer. So this is for them,” said the man who has won on African fairways before when he claimed the 2016 Zambia Open.

But victory by an Indian golfer seems a distinct possibility on the tour at the moment. Last week Atwal was defeated in a playoff for the AfrAsia Bank Mauritius Open by South African Dylan Frittelli.

This week the next generation in Sharma will give it another shot.

And fellow Indian professional Anirban Lahiri will be supporting him. Lahiri’s father is a medical doctor and they only discovered recently while at a tournament together that he delivered Sharma’s younger sister.

Defending champion Darren Fichardt will attempt to become the second South African to win the Joburg Open twice when this year’s event tees off at ...
Sport
3 years ago

The field for this year’s Joburg Open has been increased from 206 to 240 professionals and they will battle it out for a share of the R16.5 million ...
Sport
3 years ago

A day after the US PGA Tour announced they were investing in South African golf development with support for Soweto Country Club’s rebirth, Keenan ...
Sport
3 years ago
Next Article