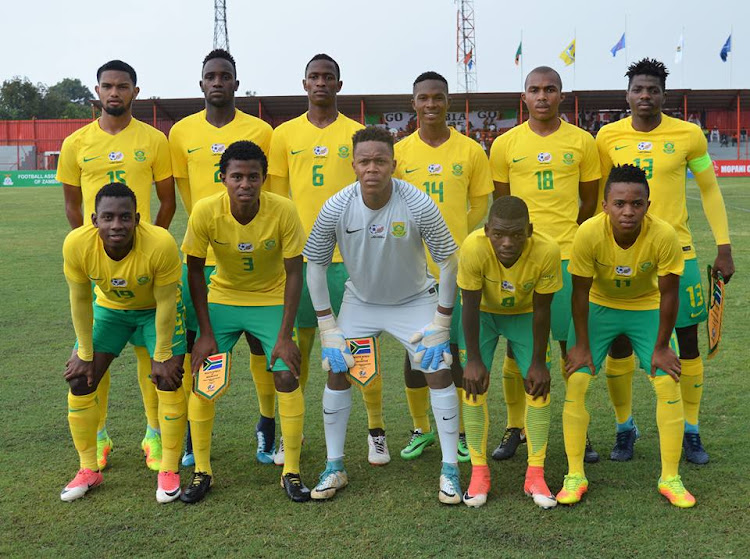 The Amajita line-up that started the 2-0 win over Mauritius in their opening Group B clash at the 2017 Cosafa Under-20 Championships in Zambia on Saturday 2 December 2017.
Image: Safa.net via Twitter

Amajita coach Thabo Senong has urged his charges to forget about their hard-fought 2-0 win over Mauritius and focus on beating Mozambique in their second Group B clash at the 2017 Cosafa Under-20 Championships in Zambia on Saturday.

Orlando Pirates’ teenage forward Lyle Foster scored twice as a second-half substitute as South Africa eventually broke down a stubborn Mauritian defence on Thursday to get their campaign off to a winning start.

Mozambique were beaten 1-0 by North African guest nation Egypt in their opener on Wednesday and aside from having had an extra 24 hours to recover and prepare‚ will also be a step-up in quality from the islanders.

“It was a good result from the boys‚ Mauritius are a good team‚ they worked very hard and frustrated us with long balls‚ but we dealt with them very well‚” Senong said.

“We knew it would not be easy to score a goal‚ we just needed to be more patient and play our game and try to look for moments of transition. They [the goals] came very late‚ but well done to the boys because we capitalised on them.

“Mozambique are tough opposition again. We just need to look at their strengths and weaknesses and plan. It is back to the drawing board‚ we need to go back to training and try to plan for the next opposition.

“We need to forget about Mauritius now and focus more on Mozambique.”

Senong has a much-changed squad from the one that picked up the silver medal in this competition last year and competed at the Fifa Under-20 World Cup in South Korea in May.

He has a fresh batch of young stars‚ most aged 18 years or under‚ who will still be eligible for the side at the 2019 World Cup should the side qualify.

Amajita play their final pool match against the slick Egyptians on Monday‚ and with just the top team in each of the three pools and the best-placed runner-up advancing to the semifinals‚ it could be a winner-takes-all encounter.

South Africa were last champions of the region in 2013 – their fifth title – when they took the trophy under coach Shakes Mashaba.

Mark Mayambela returned from injury to inspire Chippa United to a 1-0 home win over Kaizer Chiefs on Wednesday that took them into a four-way tie at ...
Sport
4 years ago

The Premier Soccer League (PSL) is one of the most cosmopolitan leagues on the continent, with players coming from as far as Egypt and New Zealand - ...
Sport
4 years ago

Bafana Bafana may have failed to qualify for next year’s Soccer World Cup but beleaguered coach Stuart Baxter and his players will not be twiddling ...
Sport
4 years ago
Next Article