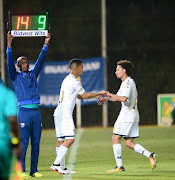 Image: Lee Warren/Gallo Images Steven Pienaar and Daylon Claasen of Wits during the MTN 8 quarter final match between Bidvest Wits and Golden Arrows at Bidvest Stadium on August 11, 2017 in Johannesburg.

Gavin Hunt did not want to comment on whether he has been disappointed at how little two of his headline signings – Steven Pienaar and Daylon Claasen – have given him at battling Bidvest Wits this season‚ and in doing so perhaps he said it all.

Wits‚ then month-old Absa Premiership champions‚ paraded a string of big signings ahead of the 2017-18 season‚ including ex-Everton midfielder Pienaar and ex-TSV 1860 Munich forward Claasen.

There were others too.

Astoundingly‚ a home 0-0 draw against second-last-Ajax Cape Town on Tuesday night left Wits rooted at the bottom of the table after 12 games.

Pienaar and Claasen – Bafana Bafana internationals – have perhaps been the biggest disappointments.

The former has played like his legs are crocked in his few appearances and was not even on the bench on Wednesday night.

Claasen started‚ and might have been rusty from a recent injury lay-off but was still disappointing in how little he provided and was taken off at half time.

“Ja‚ I won’t comment about players in the press‚” Hunt said‚ asked if he was disappointed by Claasen and Pienaar’s contribution this season.

Then he dramatically rolled his eyes and said: “They’re still fitting in. So ja.”

Asked if that is about the league‚ he said: “Well‚ I think it’s tough. It’s a hard-running‚ pacey league. It’s different.

“Anyone who comes from anywhere is always going to struggle here. Even Gamal struggles here.”

Gamal has certainly performed the best of the signings. If anything the striker has at times tried too hard‚ and seems to put pressure on himself.

He has scored five goals and shown much with his intelligent movement and mobility‚ but missed another in a string of costly sitters that would have earned Wits victory against Ajax.

Damjanovic seemed shocked by the pace of the game in SA being thrown in at the deep end in Wits’ first match‚ a penalties MTN8 win against Lamontville Golden Arrows‚ and was red-carded after 21 minutes.

He has only recovered to two more league‚ and three cup‚ appearances since.