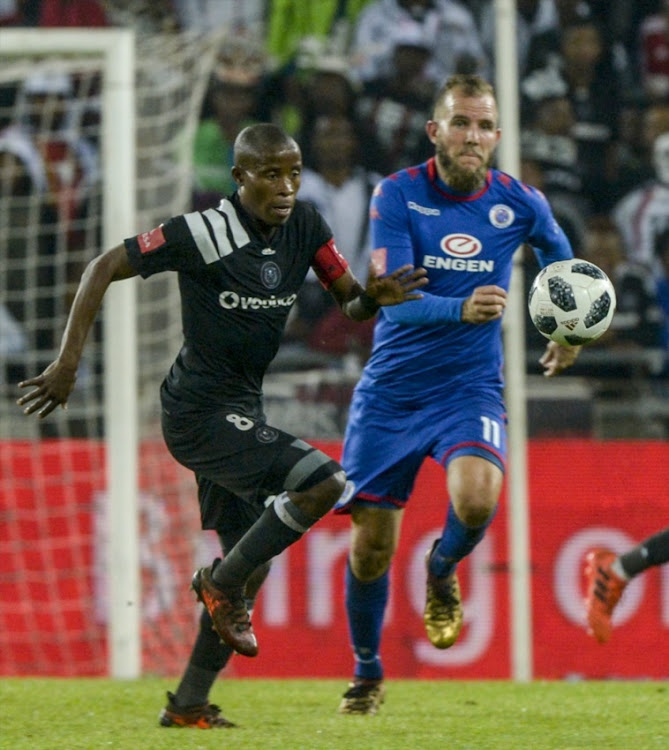 SuperSport United owned the first half, and Orlando Pirates the second, but neither could breach the other despite creating some fine chances on a sodden Orlando Stadium pitch in Saturday night's 0-0 Absa Premiership draw.

On a surface made rough and heavy from a day's cold, solid rain, both sides tried to play constructive football and found that task tough going.

Still, some enterprising attacking was produced in the final third - by SuperSport in a dominant first half, and Pirates in the second - to open the others' well organised defensive patterns.

There were plenty of shots, but no goals, mostly as a result of some characteristically appalling PSL-standard finishing.

Pirates coach Milutin Sredojevic, known for his tinkering, made just the one enforced change from his side's 1-0 away win against Bloemfontein Celtic on November 26. In-form Thabo Qalinge took a knock in a training game and was replaced by Riyaad Norodien.

SuperSport coach Eric Tinkler made four changes from his XI who beat Ajax Cape Town 1-0 at home on November 29.

Both teams came into the game in decent form. Caf Confederation Cup finalists SuperSport, who lost against TP Mazembe in that competition in the past fortnight, had lost just once in the league and might have been in 10th place but also had five to six games to catch up thanks to their continental efforts.

Pirates were in second place, though with just four wins from 12 games in this unbelievably sluggish all-round start to the PSL.

SuperSport played Bucs off the park in the first half, without the benefit of a goal.

In the 37th minute they should have scored.

Thabo Matlaba slid in for a fine saving challenge at the feet of Letsholonyane and Justice Chabalala cleared poorly. The ball was worked to Brockie to hit the right upright, with Furman smashing the loose ball over.

Matsatsantsa had another equally good chance as Modiba's cross fell on a platter for Daniels, but the centreback skied from the edge of the six-yard box.

righPirates desperately needed an injection of attacking urgency, and Sredojevic brought on Thabiso Kutumela for Norodien seven minutes into the second half.

And, with SuperSport out of ideas, Pirates finally got forward.

It was their turn to miss an ideal chance for a winner from a fine movement. Mpho Makola's pass split the defence to put Thamsanqa Gabuza through, ending with Luvuyo Memela's cross finding Kutumela to scythe a shot that skimmed off the right upright.

From Kutumela's cross Memela headed inches wide at the near post. Then Makola was through alone, beating Reyaad Pieterse but also the right upright.