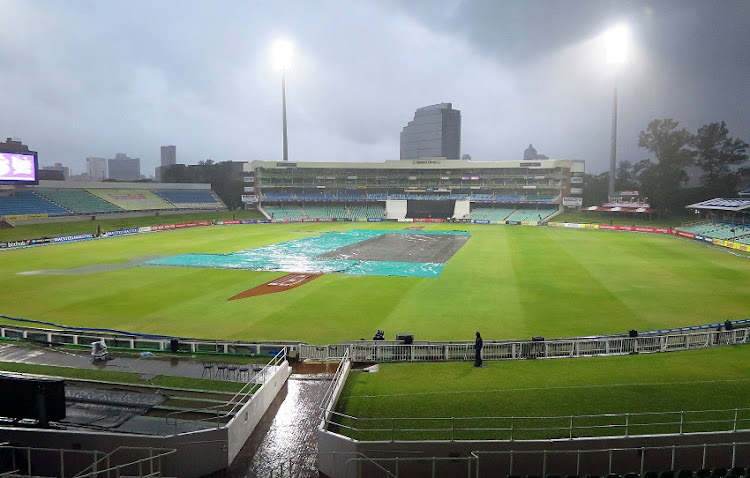 General views of the venue after persistent rain during the RAM SLAM T20 Challenge match between Hollywoodbets Dolphins and Warriors at Sahara Stadium Kingsmead on November 22, 2017 in Durban.
Image: Anesh Debiky/Gallo Images

It’s an old joke heard wherever cricket is played‚ but these days it seems to be told more often in Durban than anywhere else: if you want rain‚ schedule a cricket match.

All things being equal‚ six days of franchise cricket should have been played at Kingsmead by this stage of the 2017-18 season.

Instead‚ the weather has allowed only half as many.

By way of comparison‚ the Wanderers has had eight days of franchise cricket this season; one fewer than planned.

But that was because the Titans needed only three days to beat the Lions there in October.

The weather and cricket have long been at odds in Durban‚ where bad light towards the end of the day has prompted the start of play in tests to be moved to as early as 9am.

That made it difficult to tell who was more startled: opening batsmen who had to deal with exponentially more early moisture‚ or reporters who had an aversion to spicy food being presented with an array of Kingsmead’s famous curries for lunch at 11am.

Durban’s latest disappointment pelted from the skies on Wednesday‚ when the Dolphins’ T20 game against the Warriors was abandoned without a ball bowled.

The KwaZulu-Natalians’ opponents that day were the Knights‚ who were also stuck in the dressingroom playing cards for a whole day of their first-class fixture at Kingsmead in September.

“You have to accept that there will be washouts‚” Dolphins chief executive Heinrich Strydom said on Thursday‚ his voice heavy with frustration still dripping from the previous evening.

Strydom was appointed in May‚ and “I’m still waiting for my first [T20] home game”.

At least he wasn’t around for the debacle last August’s debacle‚ when more than three days of a test against New Zealand went unplayed because of a wet outfield.

Are there silver linings in the dark clouds that seems to hang over Kingsmead whenever stumps are pitched?

“The weather patterns say we should play in February and March‚ but the best option might be to build a roof over the place‚” Strydom said‚ not entirely seriously.

“We’ve asked to play the first five [four-day] games away and host the next five. Then again‚ your facilities probably won’t be up to scratch to host five first-class games in a row.

“It’s something we’re thinking about but there’s not a lot we can do about it.”

It’s a mad idea‚ but what about moving the franchise?

Any takers for the Dannhauser Dolphins? Or the Drummond Dolphins?

Actually‚ if we want to take the rain out of the equation they should be the De Aar Dolphins.

Annual rainfall in De Aar is all of 196 millimetres. In Durban? A touch more at 1009 millimetres.

But moving a franchise means much more than a change of name. You can’t‚ for instance‚ put a cricket ground on the back of a truck.

What if the ground was already there?

Like the City Oval‚ easily among the country’s loveliest places to play cricket‚ in Pietermaritzburg‚ which is not quite 80 kilometres up the N3 from Durban.

Been there‚ done that‚ Strydom might have said: two days of the Dolphins match against the Lions there in October disappeared down the drains.

So‚ if you’re going to the cricket in Durban best you pack an umbrella.

And whatever you do don’t tell the weather gods there’s a game on.