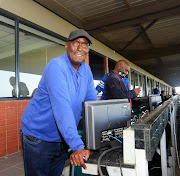 Manyaapelo‚ who was affectionately known as CC‚ has a rich history in broadcasting which dates back from 1984 as a sports presenter for Radio Bop and will be remembered to millions of South Africans as one of the best commentators this country has ever produced.

His in-depth‚ factual‚ well informed and yet playful commentary captivated many football fanatics to the SABC channels and his proficiency in Setswana inspired many youngsters and attracted them to the sport field.

Manyaapelo will be remembered for his immense contribution at the national broadcaster where he hosted breakfast programmes like ‘Re tla dula re thabile’ and ‘Mamepe’ on Motsweding FM since the eighties.

He continued with ‘Mamepe’ as well as being a television sports commentator for ‘Laduma’ since 1998 until his untimely death.

👉 You dedicated ur life to it

👉 You were extremely talented

👉 You influenced so many people

👉 You will NEVER be forgotten

👉 You gave the Airwaves so much life!! Thank u. Go well baba.#RipCebo pic.twitter.com/zp4xX3tjf5

“The country has lost a very great man in Cebo Manyaapelo‚ and his work will continue to bring us great insight and understanding of the world of sport for decades to come‚" the SABC said in a statement issued on Wednesday afternoon.

"Manyaapelo’s talent was not only confined to South Africa and  he represented the SABC beyond the borders of South Africa where his skills were equally appreciated.

"His meaningful contribution to the SABC will remain and continue to inspire all who knew him in his personal and professional space.

"He will be deeply missed and may his soul rest in peace."

The details of his memorial and funeral service will be announced at a later stage.