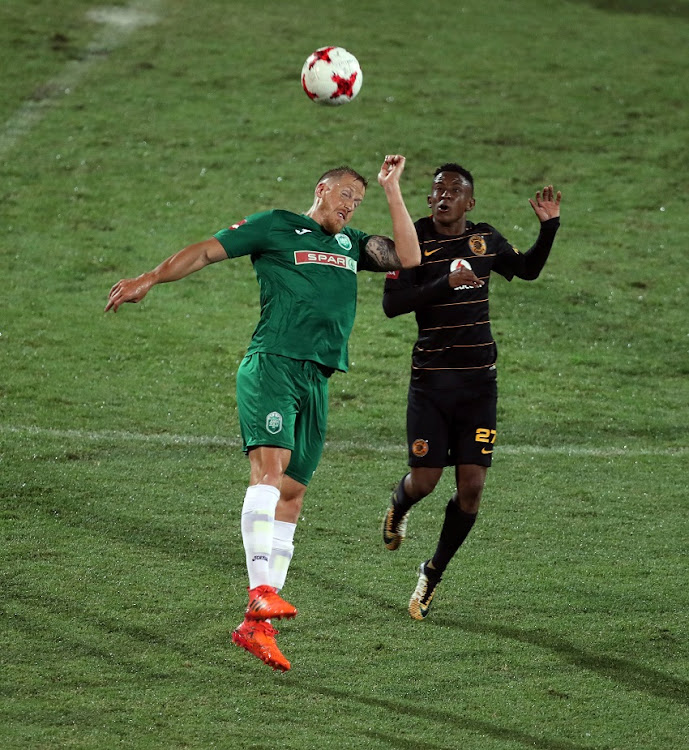 Michael Morton of AmaZulu and Hendrick Ekstein of Kaizer Chiefs during the Absa Premiership match between AmaZulu FC and Kaizer Chiefs at King Zwelithini Stadium on November 22, 2017 in Durban.
Image: Steve Haag/Gallo Images

Under the pouring rain, AmaZulu and Kaizer Chiefs settled for a goalless draw in what turned out to be an uninspiring Absa Premiership encounter of not many talking points at the King Zwelithini Stadium on Wednesday night.

AmaZulu, who finished the match with ten men after Phumlani Gumede saw red in the second half, they could have ended this match with all the three points at home but striker Lerato Lamola was denied by Chiefs goalkeeper Itumeleng Khune from the penalty spot the 52nd minute.

AmaZulu launched an attacking move into the Chiefs danger area from where under pressure defender Siyabonga Ngezana was judged to have handled the ball in the box but Lamola blasted his effort straight at the outstretched legs of diving Khune who was named the man-of-the match.

For Chiefs coach Steve Komphela, this was another lost opportunity as they drew their third successive match in the league and they are sitting sixth place on the log with some work to do to refresh their title ambitions.

For large parts of the match, they were dominated by AmaZulu even though they finished the better side as they went in search of the goal that could have seen them win their first match since beating Mamelodi Sundowns last month.

AmaZulu coach Cavin Johnson will rue this missed opportunity that could have seen them register their second win in three matches and a move from position nine on the standings and into the top eight.

The game’s best chance arrived in the seventh minute by the hosts but attacker Siyethemba Mnguni blasted his close range shot straight under the throat of alert Khune after he was released from the centre by Simphiwe Mtsweni.

Chiefs’ first real chance to test AmaZulu ‘keeper Boalefa Pule came after 26 minutes through Philani Zulu who rushed his effort over the cross-bar from a long cross by Bernard Parker but he did not realise he had enough time to pick a spot as he was unmarked on the edge of the box.

Minutes later, AmaZulu launched attack of their own but close range shots of Mnguni and Gumede in quick succession were thwarted by Khune’s double reaction save.

AmaZulu remonstrated with referee after the second shot by Gumede where they appealed that the ball crossed the line for the opener and television replays did not give conclusive evidence whether they had a case of not in one of the few notable moments.

On the stroke of half-time, AmaZulu missed a golden opportunity to open the scoring when Chiefs debutant defender Teenage Hadebe cleared Gumede’s shot off the line after Khune misjudged Michael Morton’s free kick in the box.

Pule made his first save of the match when he parried Gustavo Paez’s close range header from close range just after the hour mark as Amakhosi pushed for the winner which never arrived and Gumede saw red in the closing stages.