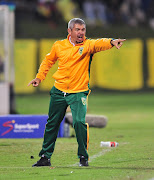 Lamontville Golden Arrows will continue to play a quick counter-attack game away to top teams in the Premier Soccer League even if they are accused of ‘parking the bus’‚ says coach Clinton Larsen.

“As a team you’ve got to assess your players and play to your strengths and playing on the break is a strength of Arrows‚" he said.

“We chose certain opponents that we want to play that way against because of tactical reasons. Pirates are one of those teams."

Arrows struggled initially to burst out of the blocks when they won possession against Pirates‚ who had the bulk of the ball in the goalless draw at the Orlando Stadium on Tuesday night but proved unable to convert their chances.

“Pirates are also good on the counter-attack and if you give them space to play behind they could hurt you.

"So we neutralised that threat by playing with a low block and getting their wing back up higher‚ which then offered us the opportunity to exploit the spaces behind (Marc) Van Heerden and (Thabo) Matlaba.

"And that was our plan.

“But there have been a lot of games this season where we have played very offensively.

"We’ve started our line of confrontation a lot higher up the field but it wasn’t the case against Orlando Pirates because that was our tactical game plan and‚ to a certain extent‚ I felt that it worked.”

The draw kept Arrows in second place up in the Premier Soccer League standings with 16 points from 11 matches‚ two behind leaders Baroka FC.