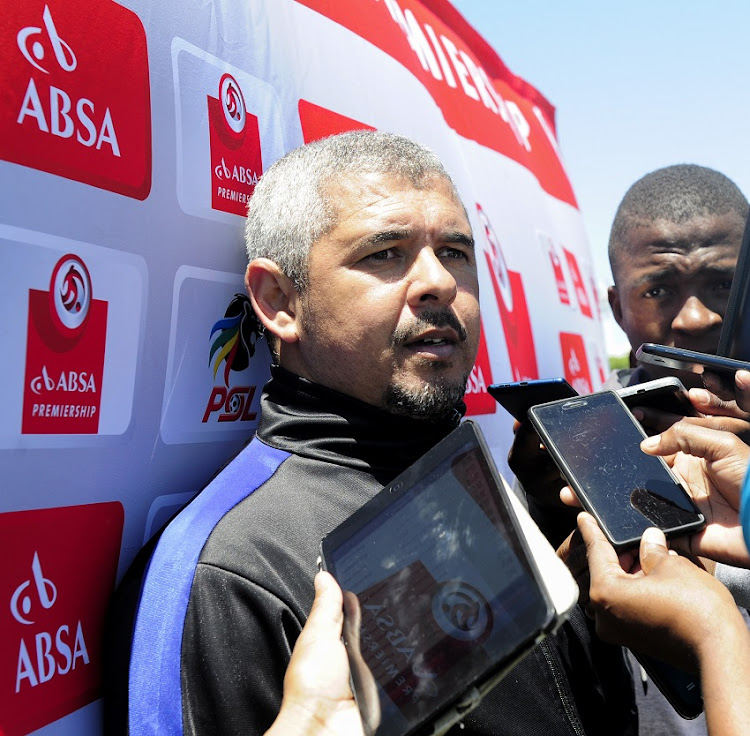 ABSA Coach of the Month Clinton Larsen, of Lamontville Golden Arrows being interviewed by members of the media during the Absa Premiership 2017/18 monthly awards at Moses Mabhida outer fields, Durban on 8 November 2017.
Image: Gerhard Duraan/BackpagePix

Lamontville Golden Arrows may have lost their unbeaten record in the Premier Soccer League but coach Clinton Larsen reckons the club could still remain among the challengers.

This even though last season they also made a bright start but then dropped dramatically off the frontrunners.

“I’ve said it all along that the key to us doing well this season is not having any senior long-term injuries to key players‚” explained Larsen‚ whose team lie second in the PSL standings‚ two points behind leaders Baroka.

“We have been very fortunate in that we’ve managed to get some of our key players back quickly. [Matome] Mathiane was out and [Lehlohonolo] Nonyane just started full training a week ago and has missed six or seven games and then we’ve got [Danny] Phiri out.

“[That’s] Three first-team regulars‚ out long‚ but back now‚ bar Danny Phiri. And if we keep the squad like this we’ll always be competitive.

“But with the size of squad we’ve got we’ll always have challenges if we have injuries to senior players.

“Having too many youngsters in at the same time doesn’t keep you up – that’s been proven time and time again. They need lots of time together to develop and to gain the experience to play at this level.

“Last season definitely has helped. I see a lot more maturity in our young players. We’ve seen them grow.

“There were situations last season when we couldn’t see games out and didn’t have the character to come back after we had conceded. We’ve seen a different mentally this time round and I think that is because of the maturity and the experience they have gained over the last 12 to 18 months.

“I do believe we can remain competitive until the end if we keep our key players fit and healthy‚” the Arrows coach added.

The Durban club are next away against Orlando Pirates on Tuesday night (kickoff: 7.30pm) having not won in their last six games with four draws and two defeats‚ including being beaten at home by the Buccaneers in the Telkom Knockout.

Arrows’ only defeat in the league was their last game on October 31‚ when they were beaten 3-0 at SuperSport United.