Wits official Schloss challenging charges against him after Komphela row 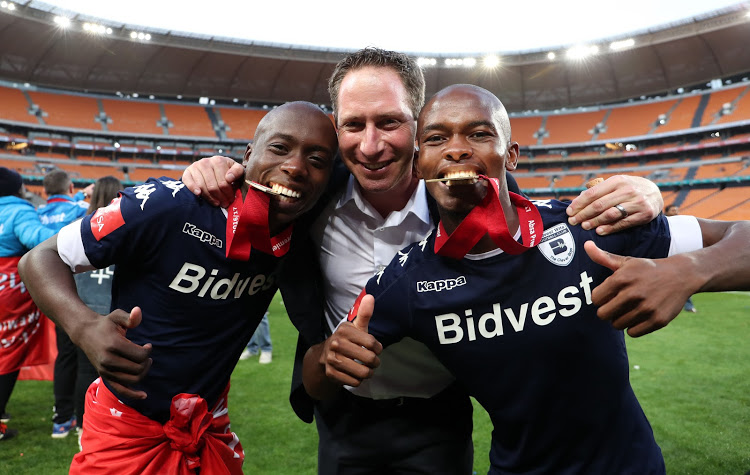 Bidvest Wits general manager Jonathan Schloss is flanked by midfielders Ben Motshwari (L) and Phumlani Ntshangase (R) as Wits were crowned the 2016/2017 Absa Premiership Champions after a match against Kaizer Chiefs at the FNB Stadium, Johannesburg South Africa on 27 May 2017.
Image: Muzi Ntombela/BackpagePix

The Premier Soccer League’s (PSL) disciplinary committee is on Tuesday night due to hear the case against Bidvest Wits’ general manager Jonathan Schloss‚ who has pleaded not guilty to a charge of misconduct‚ SowetanLIVE has learnt.

The PSL has not given any details of the hearing or the progress of the case but did announce more than a month ago that Schloss was charged with misconduct “for allegedly using offensive gestures or language against Kaizer Chiefs coach Steve Komphela”.

The Wits official was charged after the tempestuous 1-1 draw between the two clubs in mid-September at Soccer City.

It was the second time in as many games that the two exchanged words at the end of a match but Wits are determined to defend what they feel was a verbal scrap not much different to frequent heated exchanges between club officials‚ seen often around PSL games.

Sources say Wits believe that Schloss is being unfairly prosecuted because Komphela made a reference in a TV interview immediately after the altercation to “being disrespected by this mlungu” and the Chiefs coach should have also had to face accusations of bringing the league into disrepute for an unnecessary racial reference.

Komphela did not have to use the word “mlungu” but could rather have refereed to Schloss as a “Wits official” or a “member of the opposing side” without reference to his race‚ Wits will argue.

The PSL is understood to have investigated the post-match interview but decided not to press any charges.

Komphela previously explained there had been a verbal altercation with Schloss in the meeting between the two clubs at the end of last season after which the Chiefs coach wrote a letter to his opposite number‚ Gavin Hunt‚ to ask him to intercede and bring Schloss to order.

Hunt confirmed this and at the same time condemned the action of his own management for arguing on the field after the game.

The PSL also charged Wits official George Mogotsi with misconduct for verbally abusing the match officials after the game.

Mogotsi was suspended for four games and his club handed a suspended R50 000 fine.